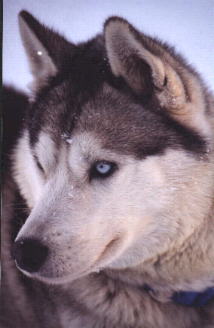 The "Ice" Litter Pedigree
Posted by Shmoo at 09:03 No comments:

When I do schools visits and ask the kids what they think the scariest thing I can run into on the trail is, I usually get answers like ‘wolf’ or ‘bear’. Surprising to many, the answer for many mushers and myself is a moose.  Whether moose see an oncoming dog team as a pack of wolves, whether they are just too stupid to just get out of the way, or whether their moose Mommies have told them they are bigger and tougher then anything else in the forest, I’m just not sure. But the fact is that often a moose would rather stand in the middle of a trail stomping and swinging their large, empty heads then move off a hard packed trail. Each winter some sled dogs are injured and in a few extreme cases killed during these encounters. This is not one of those stories.
As I was coming home with a 12-dog team yesterday, I had to pass through a quarter section of government land that is home to a herd of cows in the summer and used by us and a few other outdoor enthusiasts for the rest of the year. This is home to numerous deer, some moose, and ‘psycho’ coyote (who I will talk more about at a later date!). One of the gates was closed and as I walked up the team to go open it, I noticed Draco carrying something in his mouth. Draco is a ‘packer’. He loves to pick things up along the trail and carry them with him. I discourage this habit for fear he will swallow some of the smaller things he finds, but he sometimes finds things that I have missed on the trail. First off I tried to determine what this was I was about to attempt to wrestle out of his jaws (there is not much worse then playing tug-o-war with something dead or rotten!). I couldn’t figure it out and finally made a grab. Draco fought hard for his prize. When finally it popped out I was amused and surprised to find him packing a 4” high STUFFED MOOSE!!! Where he picked this up and what exactly it was doing in the middle of the woods in beyond me (maybe coyote pups play with stuffed moose toys – who knows), but I am very grateful that this moose encounter ended so well.
Well, except for the stuffed moose – covered in dog slobber and missing an eye – he was definitely the loser in this battle!
Posted by Shmoo at 09:01 No comments:

What busy, but rewarding times we have had of late! It all started the weekend of August 19 and 20 when Smiley, Rosie and myself went up to Peace River for a dog show. Both the ‘kids’ ended up with some more points towards their championships!
Also traveling with us that weekend was our friend Jackie Wepruk and her amazing obedience Siberian (no, that is not a contradiction!!) – Tasha. Tasha and Jackie were the real success story of the weekend, putting the last leg on their Utility title and picking up a High Scoring Dog in Trial award along the way!!!  We were so happy for them!! Obtaining a Utility title is very difficult and they have worked long and hard for this! Way to go guys!!!!!
Two days after returning from Peace River, I packed up 24 dogs and headed out to Minnesota to do some training with my friend, Jamie Nelson. The trip down was ICKY!! The temperatures through Saskatchewan and Manitoba were in the 90’s – not pleasant for furry dogs! Once in Minnesota, the temperatures were a little better. We plowed ahead with training, despite the warm weather, taking precautions to give the dogs lots of breaks and lots of water. Everyone did really well. It is really amazing to see the way my team has progressed since I first went out to Jamie’s in March of ’99. I was very proud of them and Jamie had some nice things to say about the way they are working.
I even discovered a few new leaders in the group! Surge, Mork (!), and Orion all did very well in their first few times as leaders. Cassie and Nik showed some nice potential and will be working in lead in the upcoming months.
As always, my trip to Minnesota was hard, muddy, wet, tough, educational, inspiring, and, mostly, a lot of fun!!!  I can’t begin to explain all that I have learned and continue to learn from my time with Jamie!
On my way home from Minnesota, a strange little encounter happened. Just outside of International Falls, Minnesota I ran into some trouble with the dog truck. The engine was overheating. I was pretty sure it was a leak in the radiator, but I had never really checked fluid on a radiator before. I figured it wasn’t going to be too difficult to figure out, but was wishing Mark were around to make sure I wasn’t messing anything up. At that moment, a truck pulled into the gas station. The driver stuck his head out and said ‘ Heck, I haven’t seen you since Nome’. It was Jack Welsh, who is a Race Judge for Iditarod. Actually, he is the Race Judge that I had to turn my mail packet and race bib into when I scratched in Shaktoolik. He asked what I was doing in Minnesota. I answered that I was at Jamie’s fixing the problems I had had when I saw him in Shaktoolik. He was happy to help out with my radiator and after a little visit, I was on my way again – thinking of what a small place the world really is!
On my way back through Manitoba I spent a couple nights with Brian and Brigitte Hunter. Brigitte had been kind enough to arrange an opportunity for me to do a slide show and presentation in Winnipeg. I was very pleased to have over 30 people show up, including some Internet friends that I had not had the chance to meet before!
Once I got home, I had 2 days to get the Minnesota mud off Smiley and Rosie to get them ready for another show in Edmonton. Rosie did GREAT, picking up 6 more points. Smiley was rather distracted by Rosie being in heat and wasn’t on his best behavior, but managed to pick up another point anyway.
Phew – I get tired even typing all that! And to think – this is my ‘slow’ time of year! LOL
Posted by Shmoo at 08:59 No comments: