Thankfully, it continues to be springlike in the yard meaning that Olena and her puppies have moved out of the house.

For the last bit they had been spending their days outside and nights in the backroom - but they were escaping the 'Puppy Pool' and raising a ruckus at all hours of the night. The night before last when Summit stood at the baby gate and screamed at the top of his lungs, causing me to shoot of of bed convinced he was dying, was the final straw - last night they spent outside.

Here are some pictures of the brats taken yesterday. 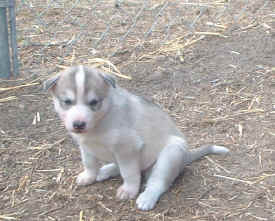 Tazlina - Although she looks half asleep in this picture,
in reality she is a clever, brave and troublemaking
puppy. She is definitely taking after her evil Mom
with her personality. 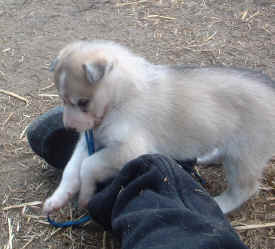 Shoelaces beware - I think this is Paxson munching
on my shoelaces 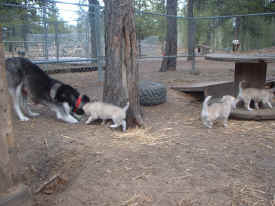 Pups helping Mom - Tazlina is helping her Mom
dig up an old bone. 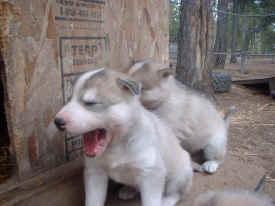 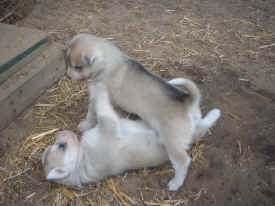 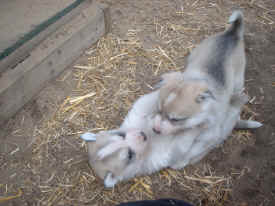 Puppy Wars Round 2 - Summit gets his butt kicked
by his sister, Tolsona. 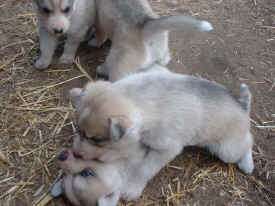 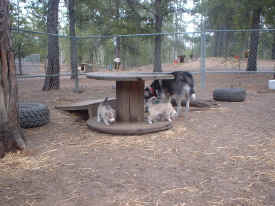 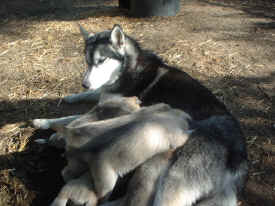 Olena and the "Who's Your Daddy" or CB
(Copper Basin) Pups 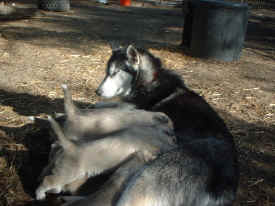 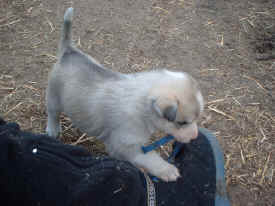 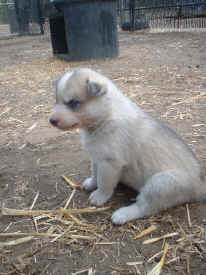 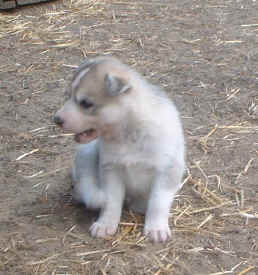 Summit
Karen
Posted by Shmoo at 12:54 No comments:

I was driving into Westlock today and the fields were full of calves and foals. Some were bathing in the sun, which is just finding it’s strength again after the winter; some were chasing each other and kicking up their heels. It gives the bleak, dry and dead landscape a real sense of life. A sure sign that spring is well on the way.

A spring ritual took place around here today – Bucket Day. After 6 months of thawing meat, baiting water, and watering the dogs, the days and nights have been warm enough that we took a chance and put the dog’s individual water buckets out. I’m sure we will get some more good freezes and I’ll probably spend a few mornings walking around with a hammer knocking ice off the top of the buckets (some of the dogs are pros at sudden freezes and have actually figured a way to get a layer of ice off their bucket – Lord knows how), but even so, it really cuts down the time it takes to feed.

It also adds a splash of color to the yard, as the blue, red, black and purple buckets now hang from each house – well, except for the houses of the yearlings. They are given metal buckets until they figure that they are not fun and exciting play toys. Runner was a trooper and after sniffing and tasting his bucket, decided it could stay. Boom needed more time to figure it out and when I looked over once was standing with one front foot in the water and trying to chew the handle. Skor never has learned to accept his and promptly lifted it off his house, emptied it and left it for dead in the middle of his run. He maybe turning 4 and have just participated in his first Iditarod, but he wanted us to remember he is still a puppy at heart. I gave Runner a plastic bucket and Skor his metal one. Maybe he will only dump it once a day now.

That’s it for today.
Karen
Posted by Shmoo at 12:53 No comments:

In my mind, the best medicine for a ‘not great’ season is to start working towards the next one, so that is exactly what I’ve been doing. We have been home for just over a week now and I have managed to get a number of teams out of the yard, including a bunch of last year’s pups, who are all doing great – but that’s not what today’s diary entry is about.

Studies have said that most accidents happen within 5 miles of home – and I’ve got to say that after my run on Friday, I can’t disagree. I got into more trouble on that run then anywhere in the wilds of Alaska this season! It happened somewhat like this…(let me reassure everyone before they start reading that all the dogs and people involved in this story are well and fine. The 4-wheeler …well...here’s the story..)

Early Friday afternoon Markus, who is on spring break right now, came over to help me run dogs. He’s been joining me on the last few runs and I’m certainly enjoying his help. As we were beginning to hook up, his sister Anna showed up and also joined in. I asked her if she’d like to come along for a ride and she agreed – she has never been out with the team before. So the three of us hooked up 14 dogs, piled onto the 4-wheeler and headed out.

The team consisting of a number of the Iditarod vets – with Kara and Dasher leading – and a bunch of the 2 year olds, was doing great and I decided to head for one of my usual spring watering puddles where we could let them drink and then start working our way towards home.

When we came to the edge of the puddle, I stopped briefly to check things out. The puddle was larger then normal and still frozen over, but heck, it is a puddle – in 2 weeks or 3 weeks it won’t even be there anymore, so I really thought nothing of it. I figured the team and 4 wheeler would break the ice as we went through, everyone would get a drink and off we would go. Things didn’t go quite as planned…

The dogs scooted willing out onto the ice, which held them, but the second the 4-wheeler hit it, we crashed through into water MUCH deeper then I thought possible and the engine died, leaving Markus, Anna and myself scrambling to keep our feet out of the ice cold water. The dogs, still safely on the ice, stopped and looked back to see what the hold up was.

As Anna just had runners on and Markus and I both rubber boots, we both jumped off into the water to survey the situation. Seeing that the water was up to our waists, the rubber boots weren’t much protection. Markus scouted out some other routes through the puddle (we were somewhat restricted in our options there due to willows and trees) while I tried to convince Kara to turn the team around. A few things became very evident – there was no good way through the puddle (I told Markus to just come back when he ended up half way up his torso in water – and those of you that have met Markus know he is not a short young man), Kara was not about to turn the team around (something she is not really trained to do anyway) and the ice would not allow us to get out to the dogs. We debated and even tried a few other ideas before realizing that we were going to have to individually rescue each dog off the ice. Markus started the slow process of working his way up to the dogs, breaking through the ice with each step. He was careful not to break ice too close to the dogs, for they needed the footing while we worked. When he freed them from the gangline, he’d push them towards Anna, (all of us were now up to our waists in water), who lifted them over a hole in the ice (the product of one of our earlier ideas), I’d then call them to me and I’d walk them (well, they would swim, I would wade) to shore. Once there, I tied them off to the trees.

It took about ½ hour of very cold, wet work to get all the dogs off the ice and safely onto shore. At one point, when things got a little dicey for a bit we ended up with 5 or 6 dogs running around loose. I was very grateful that I’ve taken the time to train my dogs to stick around when they are off leash and come when called, as no one ran off and I was easily able to catch and secure them when things settled down.

Markus and Anna did a fantastic job. They stayed calm, followed instructions to the letter, and were more then willing to do whatever had to be done. Very cool kids – I was very lucky to have them along.

The kids took a moment to wring out their socks, empty their shoes (my Arctic Muckboots kept my feet warm despite being filled with water) and warm up before we rescued the 4-wheeler, turned it around and re-hooked up the dogs. The Honda was dead, but we had a lot of dog power and after they had been standing around for over 30 minutes the dogs were more then happy to drag the machine and 3 of us home. Markus tinkered with the 4-wheeler yesterday and figures an oil change is all that it now needs.

Anna pronounced her first dog team ride an exciting adventure. Although I love a good adventure, I think I need to start training 5 or more miles from home – I think it might be safer!