When Was The Last Time You Did Something For The First Time?


A few months or so back my dear friend Kristin Fox asked if I would be a KeyNote speaker for her at a Women’s Business Conference she was organizing with her new company FinFoundHer in Chicago.

To be honest, I was thinking mostly of deep dish pizza, popcorn and some long overdue time visiting with a few of my friends fondly known as the ‘Minions’.
Kristin has long been gently pushing me to combine my Iditarod experiences with my ‘pre sled dog’ life as a business woman and do this kind of thing. While I appreciate her kind prodding, I generally get distracted by a dog, a sheep, chicken or something like that because those things are now my ‘comfort zone’. But I’m always poking people to step outside their comfort zones, so it was likely time I put up or shut up.

As time got closer I began to put some thought into exactly what I was going to speak on.

I eventually turned to the Bio that another friend, Heather Walls, wrote up and sent to Kristin for me while I was up in Alaska judging Iditarod in March.

“Wow. I’d like to know that woman”, I thought as I read it over. “She sounds cool.”
My stomach flipped when it occurred to me that it was MY bio I was reading.

“Am I really that person?”

Heather hadn’t spoke at all out of turn, I HAD done all the things she mentioned - and I had read and approved the Bio before it was sent out, but I guess I was focusing on the correctness of the statements rather than a big picture.

I guess I tend to think more of myself fumbling and figuring out her way on a herding trial field or chasing a chicken around a pen trying to sort out how I’m going to catch it than the woman in that bio.

BUT, I do pride myself in figuring out ways to rise to the occasion when I get myself into ‘situations’ - and I was going to do my best to do that this time. Mostly, I think because I didn’t want to let Kristin down or make Heather appear like a liar.

Yeah, I’ve done lots of presentations and public speaking over the years, but mostly I’m speaking to dog people telling the story of my life. I know that subject matter well. It is my comfort zone.

This was not but I put some slides and thoughts together that I thought was decent.

I was feeling good about it all till Saturday night when I went down to the Conference to meet up with Kristin. I walked into the building and realized that these women were not my people. There was not a dog or a chicken to be found.

I drank a number of margaritas at dinner that night trying to distract myself from the commitment I had made for the next day (well, and also because they were super tasty and washed down well the most excellent Mexican food we were eating).

The next morning I was up early flipping slides and running over my notes on the concepts I had put together. By the time we got downtown my stomach was in a knot.

I stepped up to the podium to face these beautiful, strong, confident women feeling like a total fraud but if I was going down, I was going to go in a blaze.

I was as nervous as I’ve ever been at a presentation as I began to speak. Would these women understand what I was trying to explain with pictures and stories of fluffy dogs, dead moose and snowstorms????

I noticed a few writing notes as I spoke and prayed they were not writing grocery lists or reminding themselves to book a hair appointment next week.

I took a deep breath and finally felt my stomach and shoulders relax a bit.

The presentation wrapped up and there was that TERRIFYING moment of truth - “Are there any questions?”.

Please don’t let them ask how I pee on the trail, I thought.

Not that that isn’t a valid question, I get asked it all the time and don’t mind answering but I wanted them to have got the concepts of building teamwork and teaching leadership that I had been trying to pass along.

AND THEY DID!!! The questions were TREMENDOUS.

I was so relieved and it was SO GRATIFYING!!!

My thanks to all that took the time to tell me how much they enjoyed the presentation and that they felt they got ideas that they could take away and use in their work. I can’t begin to say what that meant to me.


So, when was the last time you did something for the first time? 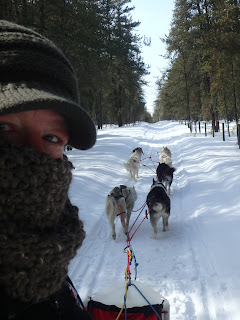