New Champion!
Lots of news from the weekend, but for now I'm just going to report the show stuff!

I was at the Westerly show in Edmonton with Freya and Mannie. It wasn't the greatest weekend for us, but Mannie did manage to pick up a Group 4th yesterday under Cec Ringstrom that I've very pleased about.

My bud, Jackie Wepruk was there with her Smiley son, Jaraw's Zini Zepplynn and they picked up 2 more points towards his Championship.

The really exciting news came from Prince George, BC where Loki was with his handlers, Cynthia and Kerry Seeling. Loki took 3 Best of Winners wins to finish his Championship!! Way to go Loki!!! We are so, so pleased!

This has been the worst July we have had since moving to Perryvale. Okay, others may disagree and think that warm evenings, mornings, and hot days are an enjoyable thing during the summer. Me - I'm more a fan of cool mornings and warm days! * sigh *

I've only been able to get 2 teams out so far this July. But I do admit that I'd rather have a warm, 'unable to run' July then the same in January or February! The 35 miles that I had planned for the dogs this month will easily be made up down the road.

The pups have certainly been keeping us busy. Chip, Dare, Q, and Jinx have all adapted well to outdoor living. They have even learned to dig, which keeps them nice and dirty! We took them into the vets yesterday for their first shots and a checkup. One of the techs commented on what an interesting soft gray color Dare was. I had to own up to the fact that she was actually white - just very dirty! Ah, well - they seem happiest that way!

Yesterday I filled the kiddie pool up for them. No one is brave enough to dip more then their toes in it yet, but I'm sure in no time they will figure out how much easier it is to get dirty when you add water to the equation!

Kaylinn's kids are as noisy and rambunctious as week old pups can be. Finding themselves more then 2 inches from a nipple leads to squawking and screaming that you wouldn't believe. I've run into the back room a million times, figuring the pups were tangled in a blanket and on the verge of death, only to find out that the fuss was over not being able to push one of their littermates away from nursing or something equally simple. What a pushy bunch they are!

Loki is now out with Cynthia and Kerry for the summer. Cynthia says that he is getting along with all the other dogs and other then the death and destruction of a few plants in their garden, things are going very well.

He actually picked up 3 more points towards his Championship at the Evelyn Kenney show in Calgary the weekend I dropped him off. Just 3 more to go! This weekend coming up he will be in Prince George, B.C. working on those last 3 remaining points. Go Loki!!!!

Actually, it will be a busy time in the ring for us over the next few weeks. In addition to Loki being out - Mannie, Freya and I will be in Edmonton.

After the weekend there, the dogs and I will be home for a couple days and then heading off to Calgary, for what will probably be our last show of the summer.

I'm crossing my fingers and saying my prayers for Freya and Loki finishing - as well as some nice wins for Mannie. I've been threatening for a while to retire Mannie from showing, but he enjoys it so much and has been doing so well lately, that I just can't! And I will admit, although it is not the same 'rush' I get from being behind a dog team, there is a certain indescribable thrill to gaiting a beautiful, capable example of your breed around the show ring!

Stats, Puppies & Show News
July 1 is always the ‘start’ of the new season for us. No real reason for that, except that I used to take a few weeks ‘off’ of running dogs in June and then would get back at it in July. The last couple years I’ve done without the time off, but the beginning of July remains the time we ‘zero’ the dog’s mileage and start from scratch.
I’m blessed with a really handy ‘Excel’ database that my father in law custom wrote for me that allows me to track all kinds of interesting information on the season and I thought I would share some of the stats with you.
This past season –
It is rather intimidating to see the totals revert to zeros from numbers in the thousands, but it is also time to hope, dream and plan for the season ahead.

The puppies are doing wonderful. We have settled on names for them. Oreo’s pups are Chip (m) and Dare (f). Kluane’s kids have a ‘James Bond’ theme – with the girl being Jinx and the male Q. They have, pretty much, moved outside now – although I have been breaking down and letting them in the house at night. Last night we had 3 escapees from the whelping pools (all but Chip) – so the nights inside are about to stop.
Just in time too – as Kaylinn is due a week from today! The disappointing news on the ‘whelping front’ is that it looks like Jumper is not pregnant. Maybe next year!

News from the show ring is good – great actually. At the Grande Prairie show last weekend Loki picked up 4 points towards his Canadian championship, as did Freya – which is amazing considering she is COMPLETELY out of coat. Even cooler was the fact that Mannie won 3 of the 6 Best of Breeds, a Group 2nd and a Group 1st. The Group 1st was particularly sweet, as Mannie has won a number of Group 2nd’s, but a Group 1 has always eluded us.
That inspired me to enter him in a few more shows this summer – now I’m praying hard that he doesn’t blow the lovely coat he has!
Loki is heading out to a few shows in July and August with professional handlers Cynthia and Kerry Seeling. Cynthia and Kerry are the only handlers that I will trust with one of my ‘kids’. You can check out Cyn and Kerry’s website at http://www.equinoxpermreg.com/~seeling/. You can even see a picture of Loki there, under their ‘Future Stars’ section.

More soon!
Karen
Posted by Shmoo at 18:00 No comments:

Dog Show News
This past weekend Iditarod finishing Ch. Kainai's Anchorman ('Mannie') continued his rewriting of the history books (he is already 1 of only 3 Champion showdogs and the only Group placing Champion in the history of the breed to finish Iditarod), racking up another Group 2nd and a Group 1. Our thanks to Betty McHugh and Merlin Vanderkinder for these rewarding wins.

In the US, where he is 'summering' - Iditarod finishing Cdn. Ch. NorthWapiti's Guy Smiley (another one of those 3 history making dogs) took a Breed win from classes.

And, finally, to show off the true versatility of these lines, NorthWapiti's Tucoldturain Hugi CDX, owned by Jackie Wepruk and Rick Austin, obtained a CGN title and another qualifying score in Open (190.5).
The couple bottles of champagne weren't really necessary - we were flying high on just the wins - but they sure were enjoyable.

Kennel Addition
Last week we welcomed a new addition to the kennel - Kimlan's XZackeryit at NWapiti. Zack is an adorable 4 month old puppy from Don and Rosemary Hooker of Kimlan Kennels just outside of Montreal, Quebec.
I had seen and fallen in love with Zack's older brother Ch. Kimlan's Millennium Moonbeam while I was out at the Canadian Siberian Husky Nationals in Montreal in 2001. I was delighted this spring when the Hookers emailed and offered to sell me the sole male puppy of a repeat breeding of Beamer's parents.
We have high hopes for this handsome grey and white boy. Watch for pictures soon!!
Also, my sincere thanks to Hookers for making their summer holidays a trip out west to deliver Zack to us. It was very, very appreciated and we loved having you visit! :)
Karen
Posted by Shmoo at 17:58 No comments: 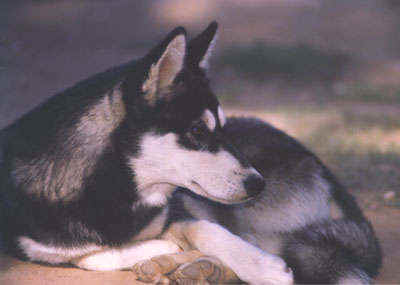 Last night we said goodbye to a very special gal in our lives - NorthWapiti's Alpha CD, SDX, TT
'Allie' was the last born out of our very first litter of puppies. She snuck in her entrance long after we thought Libby was finished having puppies. She didn't escape our notice for long though.
From the beginning, she was Mark's girl - the only one he's ever put a suit on for! He always wanted to look good if he had her in the ring. The two made their appearance in the obedience ring and occasionally conformation.
When we began to get more serious about running dogs, I borrowed Allie to lead for me in races. I never came even close in her eyes to her Dad, but she humored me and was a hot damn lead dog - my first real leader, actually. I've always credited her with winning the 54 mile Gold Rush Trail race for us. It was her leader skills that got us quickly through some tricky parts of the course that messed up alot of the other teams.
Although she never had a litter of pups for us (we tried - it just wasn't meant to be, I guess) - Allie will never be forgotten around here. Her legacy lives on in all the leaders in our kennel now and always. And she will live on in both our hearts, although particularly Mark's, forever.
As our vet said last night "She running down happy trails now" - and she deserves that.
Karen
Posted by Shmoo at 17:57 No comments: