Since training is going on, the Musher has little time (by the way, if you are a Canadian and want to be a Handler, please contact us using the "Contact Us" page... seriously... we're serious, totally serious, and please, don't e-mail us if you WISH you could be a handler, only serious inquiries please), and time is short, we're doing a LOT of posting on the Facebooks and not so much on the bloggity blog, so I'll be starting up my weekly weeks in review phase again!

If you want daily updates... ahem... the Facebooks.

Anywho, I just wanted to warn you that this update contains a big case of the sads.  We'll just get that out of the way because we don't like to end on a sads note.

He was fine last week, even had some good harness time, but then he started acting sickly and throwing up, and refusing his tasty Eagle Pack foods.  The Musher rushed him to the extraordinary, fantabulous Westlock Veterinary Center and they ran tests and poked and prodded and examined and ran more tests, and determined that he had a liver infection.  Why?  Don't know.  As the vet says "S*#t happens".

He came home to the kennel yesterday, has been made comfy in the house (and yes, I gave him the cloud, I'm not a horrible monster), and the Musher says this: 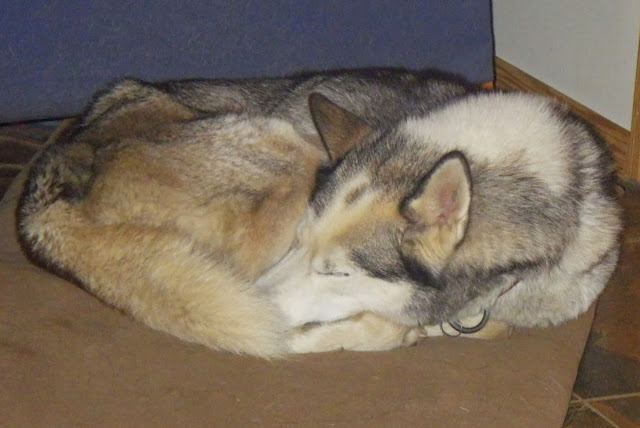 "He came home from the vet yesterday and is very happy to be back at the kennel.
Unfortunately, his test results did not come back well. Rocky is in liver failure.
We have him on a special diet, antibiotics, special liver support drugs and milk thistle but his vet feels that we are looking at a matter of months - weeks if his system doesn't adjust well to being off his IVs.  I am crushed."

We are all crushed, and are trying to make him as happy, comfortable, and loved as possible.  We appreciate your thoughts and prayers for Rocky.

On top of that, while on a fantabulous training run 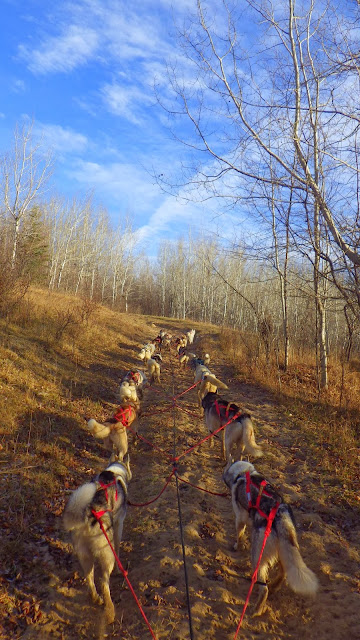 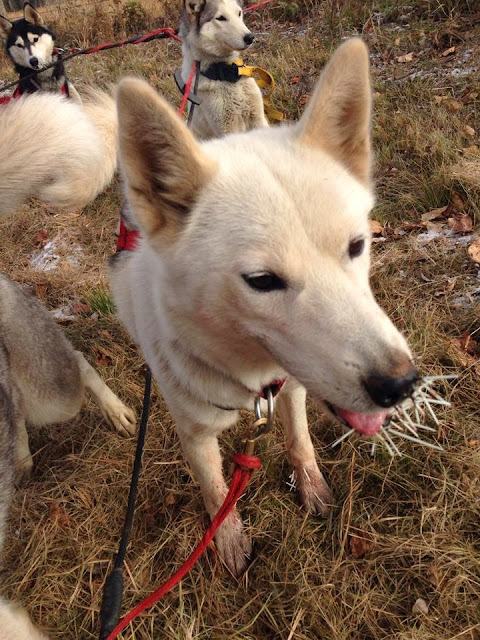 Five members of the team (including Kelly pictured above) got quilled.  The Musher blogged about the icky horror of it all earlier, but this, added to the Rocky illness, and well... generally.... things have been pretty frantic around here lately and we're not at all happy about it.

Yes, I allowed all of the quilled team members to lay on the other "clouds" that I have hanging around the house and took to my sofa so they could recuperate.

Kelly got a cool lightening bolt on her leg bandage (we're waiting for her to pass a quill there). 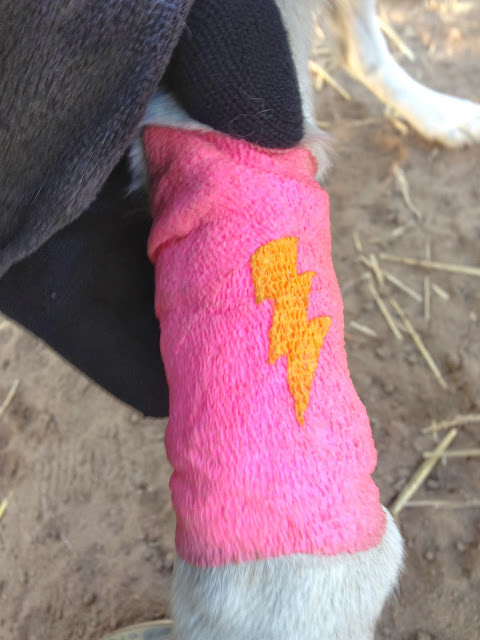 In case you don't know, quills migrate through the body... that is such a horribly ghastly concept that I nearly threw up.  Here is everything you ever wanted to know about quills, but once you read it probably never wanted to know that about quills and frankly we would appreciate it if you would start eating porcupines and we don't care what certain organizations think about that.

Despite all of this... training must go on. 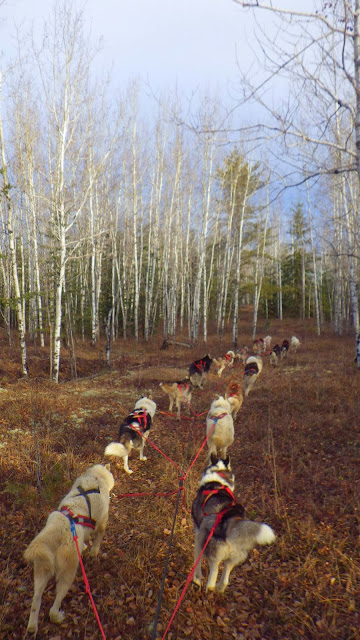 Thankfully the team has had some very good, uneventful, relaxing, fun runs.

Since my being flung off the quad, I am testing various methods, techniques, and tools to invent the perfect surfaces for quad seats that will keep me on board.

Here I am testing out the "straw" method on the much slower and safer wagon. 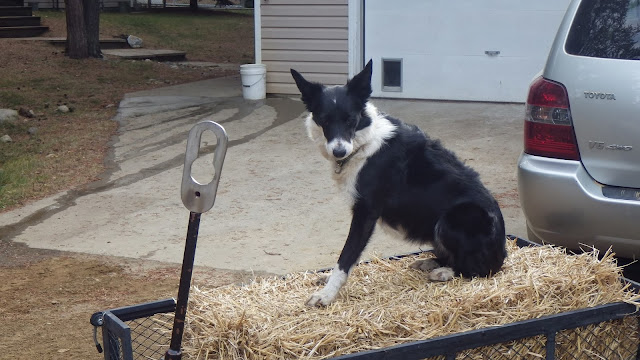 Although the Musher has told me that she will not allow a bale of straw on the seat of the quad, I feel that she's warming up to the idea somewhat.

Here is the team battling some rush hour traffic 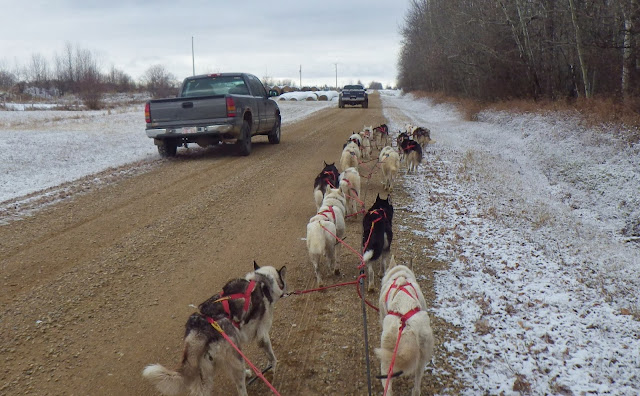 We would also like to point out that while some of the main string is recovering from the porcupine, Todd has decided that he is the Alpha Curly Tail, and feels that this picture demonstrates his divine right to lead. 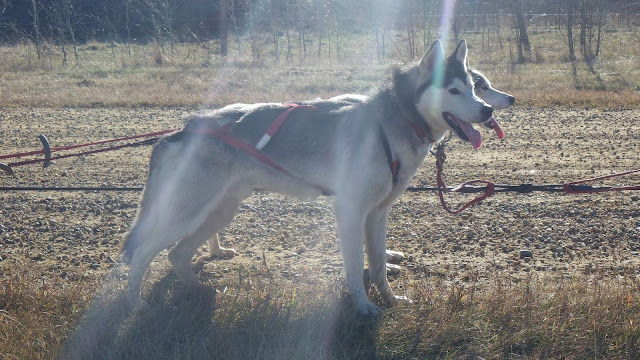 We will be cutting a larger hole in his dog house to fit the gigantic head he's growing.

We want to remind you that the wonderful, fleecy, soft, fashionable sweatshirts are still on sale, and you must buy one... no, really... click the button and go buy one so you can look as fabulous as I do 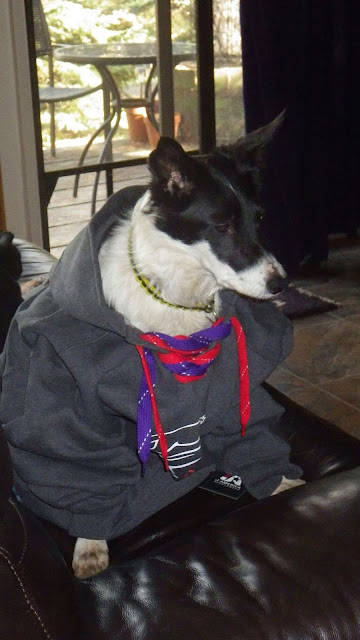 I ordered one!!! And I can only hope to look as good in it as you do Bet! Especially with those beautiful purple & red laces (two of my favorite colors!!!)

Sending prayers to Rocky. I remember when he was THE puppy and SO cute in 2008!