First off, let me start by saying that everyone is fine. Not an injury or dent to be found!

Anna was over today helping out in the dog yard. She stuck around for dinner and then helped me feed the yard, as Mark is on night shift. Very nice of her, but she is just that kind of gal!

Where Anna is, Nova usually is. Nova is a NorthWapiti dog out of X and Tolsona. One day I'll have to share the story of how Nova came to live with Anna, it is a pretty cool story. 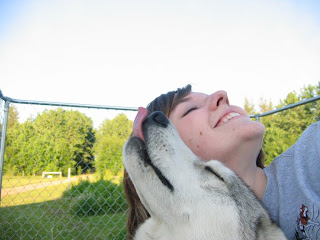 Anna and Nova
Anyway, as Anna and I fed Nova puttered around the yard with Kara. Our dogs are used to having loose dogs they know around at feeding time. Kara wanders throughout the yard at will and Cricket figures that anything that falls out of a bowl is hers (It helps make my dogs the veracious eaters they are), so when Nova wandered over near Crunchie, who was actually already finished his dinner (he gets fed first) I thought nothing of it. Afterall, Nova spends alot of time here and not only are the dogs used to her being around, many of them have run with her in harness.

Crunchie thought differently and growled a warning at Nova. I didn't think anything of that either (warning other dogs that they are being rude is certainly acceptable here) but apparently Cricket did.

One hundred plus pounds of canine bodyguard came charging into the kennel to back up Crunchie and attack Nova.

What I find most interesting about this is that Cricket and Crunchie really don't like each other. They get along okay, but they had a bit of a rocky start and Cricket never just hangs out with Crunch like she does alot of the other boys. However it is clear that she recognizes him as part of her 'herd' and will tolerate no one messing with 'her' dogs.

I've seen the behaviour a few times. Cricket is fine with strange dogs - really fine, but if they challenge one of 'her' dogs, she declares her 'side' quickly and decisively.

When the odd scrape breaks out in the dog yard, she never attacks, like she did with Nova tonight. She will bail into the middle of things and just stand there. If that doesn't defuse the situation (it normally does) she will get alittle involved (I will step in at this point) but never does she attack one of 'her' dogs.

It is pretty neat to see this instinctive behaviour. Like sled dogs pulling and retrievers retrieving, this is what Cricket's instincts tell her to do. It is what helps keep our yard safe and what she is here for. It was however, a good reminder for me to be respectful of her instincts.

The scrap was quickly and easily broken up. As tough as she is, Cricket defers to people (besides Anna is like a mother grizzly when it comes to defending her gal) easily. She was not punished afterall she was just doing her job, but we did leash up both her and Nova for the rest of the feeding. 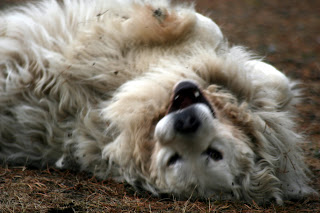 Nova headed home with nothing worse then a bruised ego. Cricket doesn't see what the fuss was all about - and Crunch?? Well, he's stoked, he figures he has his own personal enforcer now.

Crunchie with a hundred pound bodyguard - bet he is walking with a little swagger at the moment.

I really love the personalities and interworkings of the Kennel Karen. I can just picture Cricket thundering in, too. Poor Nova, you all have to listen Crunchie more closely----Cricket sure did.
How great to see Anna again, you're right she is a great gal. we've missed seeing her smiling face.

Karen, I loved this entry!
And I also can imagine a cartoon by Penny, of Crunch snd his personal bodyguard :)

Wow! That was a unique scenario. It is very interesting to see the dynamics of the different breeds in respects to doing their "jobs". Glad there was no bloodshed.

The pictures are just wonderful. Tammy in Silver Spring

Way to go Crunchie, your own personal enforcer, you da man.

Atta girl, Cricket, you look after that Crunchie guy!