This morning was a lovely (to 'Winter Chicks' anyway) 2C when I got up at 5:30 am. I lured the 'Pit Crew' out of bed with the smell of waffles and coffee (waffles and hot chocolate for the 11 going on 12 year old member of the crew). They, with a bit of assistance from me, left nothing behind but crumbs and coffee grounds before springing into action and out the door.

This team consisted of Runner and Wifi; Barq and Flash; Fritz and Herman; Tie and Hector; Q and Jack (on his first hookup); Fritter and Tess; Kim and Kelly; and Bingo and Dasher in wheel.

Because 'The Great Sledding Gods' had granted me such a wonderful run on Wednesday morning, it was time for my reality check.

The SECOND Jack realized he was hooked in at the neck AND the back of his harness, he threw a hissy fit of EPIC proportions. Now understand, Jack redefined 'epic proportions' the first time we didn't move fast enough with his dinner. This hissy fit was EPIC even compared to his previous epic hissy fits.

Luckily Mark was there and was able to hold Jack still till we could get on the ATV and get moving. Thankfully, forward momentum stopped the fit. Jack settled down and started pretty well for a rookie. In fact, I think this was the first time in about 6 months that Jack was actually quiet. I was grateful.

Things went relatively smoothly for the first mile and a half or so - then we hit the river. Apparently Jack doesn't do water and he dug his toes into the sand on the edge of the water and SCREAMED. Unfortunately for Jack, one young dog in the middle of a 16 dog team can't really choose not to go forward. The team basically catapulted the protesting youngster into the water. Jack decided that physical protesting wasn't too effective, so he gave that up and threw all his energy into a vocal protest. There was no way that we were seeing wildlife this morning - every wild critter in a 5 mile radius was probably heading for the hills by now.
Everyone got a drink and we were underway again.

Kim and Kelly decided that everything was going too smoothly now and figured it was a good time to start playing with each other as they ran. Wifi, who has hit a 'plateau' in his leader training several weeks back, lasted about another mile before he entirely lost his focus and wandered off into the woods creating a huge tangle. Jack screamed, Kim and Kelly played, Wifi was rolling on his back - I was looking for a big tree to bang my head against.

Another 3 or 4 tangles later Corrine and I switched Q into lead with Runner - hoping that that might mean we were going to get home sometime before the temperature got ridiculously hot.

That actually worked, although Kim and Kelly continued to mess around and play as they ran.

When we hit the river on the way home Jack only threw a minor hissy fit; Wifi was back to his normal hardworking self; Kim and Kelly continued to mess around.

The rest of the run passed with only about another 5 or 6 tangles.

Now not that it was a 'BAD' run - it really wasn't, it was just that compared to the fantastic run on Wednesday, this was a let down. I always say that you have to have these runs so you appreciate the good ones - but that doesn't mean I can't whine about the 'less then good' ones! =)

We did actually take a few pictures and a bit of video today. None of Jack though - he didn't stay still long enough - and he is blowing coat and looks alittle like Wiley Coyote right now - but you can see his shedding fur floating downstream in some of the video! 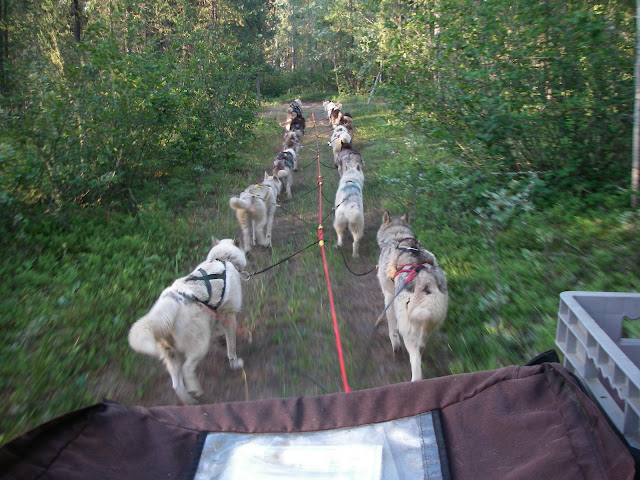 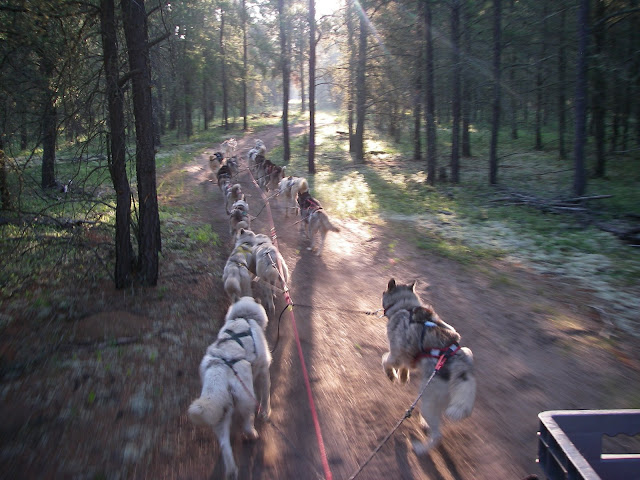 Runner, Q, Flash, and Barq in the river on the way home. 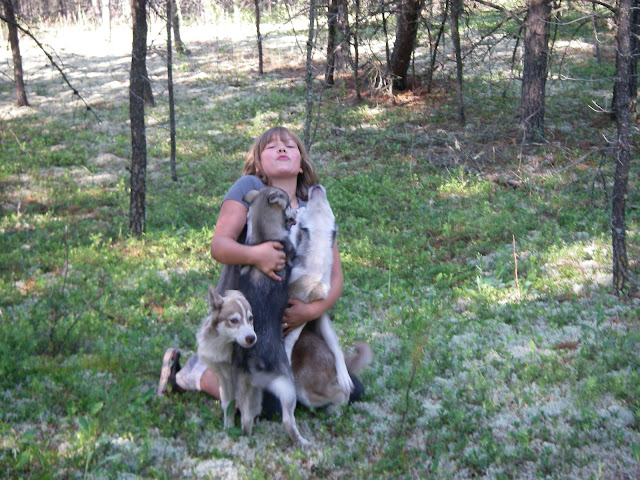 The rest of the photos can be seen at http://picasaweb.google.ca/northwapiti2/July312009

Having trouble with pictures downloading only first 2 and last one. Also no videos in last blog. Would have loved to have seen Jack!!
Mary in Oregon

Looked like everyone had a good time. Had to chuckle at Jack tho. He must be related to my dogs in some way as mine DO NOT like water either. Baths are truly struggles on my part, and puddles well forget about them going through them. They gingerly jump over them - and God forbid a paw get in that water. They will shake that paw til all that water is on me!
Continue finding positive things about your runs, remember, there are rookies - the future of North Wapiti.

Don't know what to say Mary, they are loading fine for me.
Could be your server. Maybe try again in a little while.

Sadly, your description of a rough run would sound like one of my better runs. Groan.

OK...we'll listen to your whining. Only because we know that when Jack knocks your socks off you'll tell us about that too. Got love jovial Kim and Kelly though. Looks like the birthday girl got her share of birthday kisses from the pups too.

Sounds like a wonderfully entertaining run! and good training for your understudy :-)

Recovery from the knee surgery has been slower than I figured, haven't made it up to the computer much, but your writing is well worth it. I can just picture the tangles and Jack's antics. Not funny to you, I'm sure Karen, but really gave my morning some great chuckles.

Mention of 2 C wouldn't be out of line here in Southern Manitoba. Hasn't got quite that cool but several mornings in the single digits. Just went through 5 days of rain. If you were here Karen you may have been able to run dogs just about all "summer" so far ... 7 months of below normal temps and starting the 8th. Warmest its been has been something like 27 C. Gardens are the pits, moss growing where it shouldn't and weird toadstools and mushrooms everywhere.