I just thought that I would clarify a little something the Musher posted on her first edition of her Blogging 'bout the Bikes edition of her RAGBRAI adventures.

She said that Shelly RAGBRAI Minion and Helen (back to smelling like cookies) Handler insisted that the Musher needed a bike with a basket for me for next year. 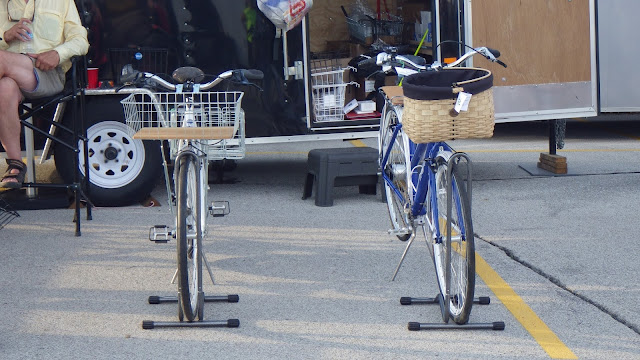 The caption said that we both said "NO" about the baskets.  Well, that is true.  Baskets on the front of the bicycle are NOT satisfactory for my needs.

In the first place, there is no protective cover on them.  The sun would just beat down on my sensitive head and bake me!  Plus, I'd be all in the front of the bike while all manner of icky bugs and pokey pokey beady eyed birds and creatures smacked me right in the face!  These baskets are also very small, and my whole body would get crampy trying to sit in one of those for hours and hours!

No, a basket on the front will not do at all!

I prefer something more roomy, stylish, protective from the sun, elements, and bugs (euw)... something like this: 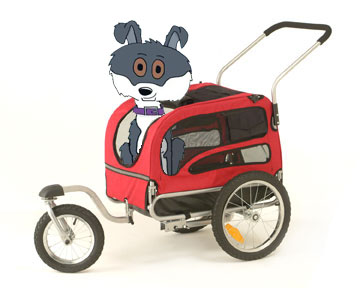 Check this out!!!  Plenty of room to lounge and relax, covered from the sun and elements, with a nice screen to let the wind ruffle my furs, but keep the icky bugs out!  This particular model not only hooks to the back of a bicycle, but it also doubles as a stroller, so the Musher can roll me out to the dog yard, or out to the truck before our car rides to Starbucks.  I think it is cost effective in that a bike basket can only be used for bike rides, but this little gem has many uses!

Another reason why I didn't join the Musher for RAGBRAI 2013 is because she told me that it was just a bunch of peoples riding their bikes across Iowa.  Um... ok, I'll pass, thank you very much.  There was no mention of the parties, the camping out, the shopping of wonderful ensembles, or the non-stop tasty foodables!  Oh no, there was no mention of this from a certain someone (ahem), otherwise I would have used my savings to purchase the Bet-mobile and gone along.

Not only would I have been a participant, but I would also have served a valuable service to the whole RAGRAI organization!  I heard that sometimes the peoples were confused about where things were and what time they needed to show up, or they couldn't find Mr. Pork Chop.  This is where having a Border Collie would have been invaluable to the organization.

My herdy skills would come in handy especially when foodables were involved, and there would probably be extra points for penning bike riders! 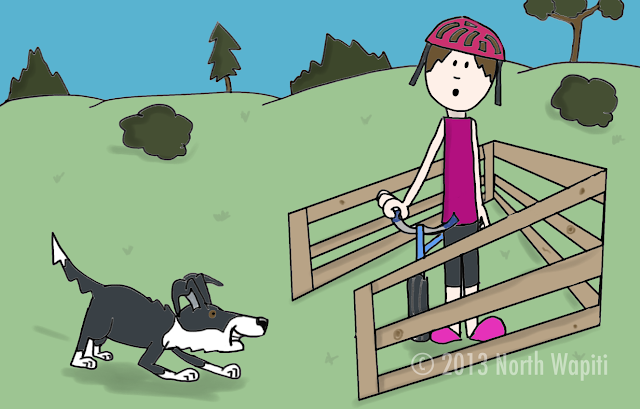 I encourage each of you to insist that for the 2014 RAGBRAI that I be brought in as an executive people herdy consultant.  I will only accept fully paid transportation to and from the event, a free Bet-mobile, and free food throughout for me and my assistant, the Musher.

Get on that peoples!

Oh Bet I think that would be neat to see the musher biking with a Bet mobile. I will look forward to meeting you in 2014 and seeing a Betmobile. I will make it a point to find and meet you somewhere along the way. Great idea and I think many people would enjoy seeing you.

Did the musher see the small terrier type doggie riding along in such a device - only without a shade cover. It looked like fun in the early morning but I was wondering how hot it might have gotten later in the day, inches above some of that pretty new very black asphalt on the route.

Bet, if you set up a Kickstarter account I believe you'd have your Betmobile in no time at all. I think you should also request a battery-powered fan and a side of waffles.
Love, Jeb (CCI puppy in training)

I think you will have a huge fan base if you come in 2014!!! I'm sure Shelly Minion would love to drive you from place to place in the air conditioned jeep too!