The next morning broke damp and foggy. Today was the longest day of the ride - 83 miles and honestly, both Helen and I had concerns about the distance, which was longer than either of us had ever ridden - and we wanted to get an early start. It was just before 6:30 when we headed out.

The fog burned off quickly and it turned into a rather brutally hot day. 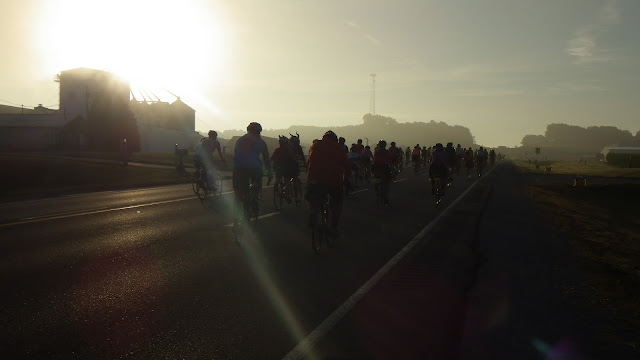 I have to say this was the morning that made us wise on our morning routine. We passed a number of little 'organic' 'free trade' type coffee stands figuring we would eat and fuel up on caffeine in the first town of Kimballton. A MISTAKE that we would not make again.

Kimballton was packed. It was the only time on Ragbrai that I was frustrated by the crowds. We had 15 miles under our belts, were hungry and needed a bathroom. We took care of everything with little enthusiasm, after waiting in HUGE line ups, and then fled. 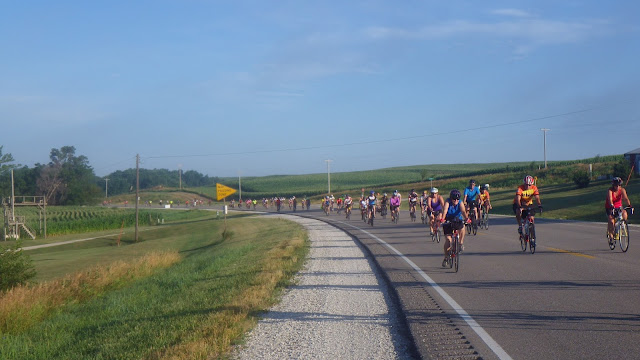 Things improved a lot once we were back on the road. The weather was lovely, the scenery beautiful. A number of very fast pace lines roared by that morning. I knew that Lance Armstrong was riding and figured one he was in one of those groups. Sure enough he was.
Many folks have asked about Lance being on Ragbrai. The fact is he picked his first public outing since his 'coming out' on Oprah well - I think most folks just didn't care. There was a group of young spandex-clad men with 'Dopers Suck' written down the leg of their biking shorts, but there were also a number of signs begging Lance to stop at various places along the route (I hear he did stop at many of them - posing for pictures, shaking hands and even recording phone messages).

I rode with a young guy for awhile in the afternoon who had tried to join in on the Mellow Johnny's (Lance's team) pace line. He said they were averaging about 30 mph and he couldn't hang on! ;)

A ways out of the 'meeting place' we stopped at a Ragbrai icon - Mr. PorkChop 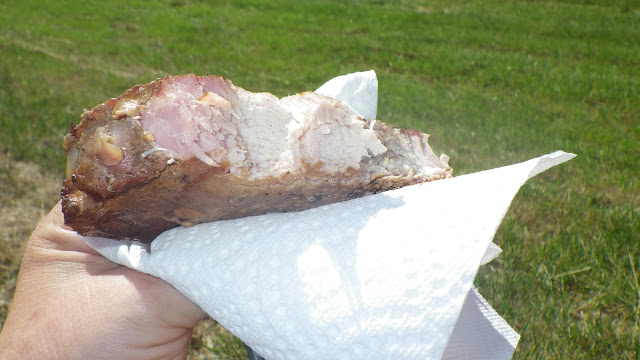 Sublime!!!! (Helen doesn't eat pork, so she forced herself to down a serving of pie!)

We stopped in Guthrie Centre for water, Gatorade, some snacks and some down time in the shade before meeting up with Shelly to grab some extra sunscreen and yet more fluids. 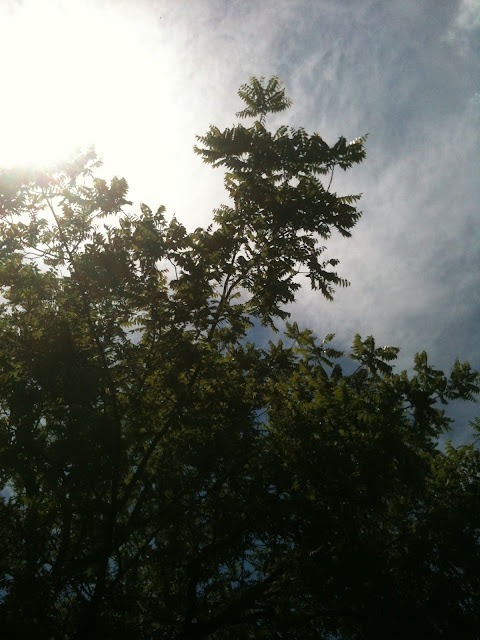 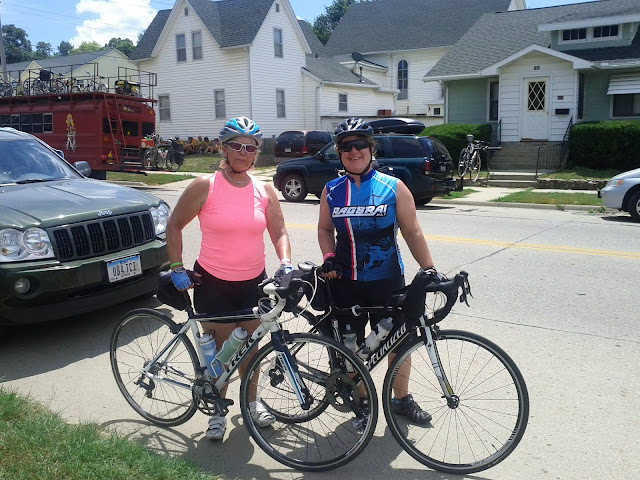 We had done 45 miles already but still had close to 40 to go. Temps were now around 95F with high humidity - so we were being very careful with sunscreen and fluids.

A bit outside of Guthrie we hit the biggest hill of the 400 miles. It was definitely a grunt to get to the top, but I had vowed to myself that I would walk NONE of the hills on Ragbrai (part of my goal to prove to myself what I am now capable of) and I indeed pedaled to the top. There was only a small group of us still on our bikes there.
A mile or so later a local farmer had a 'farmhouse shower' setup in his driveway - basically a hose slung over a ladder. I pulled over immediately, pulled my helmet off  and stuck my head into the water. It felt so good I ripped my jersey off (no fear Mom - I had a heavy duty sports bra on underneath), soaked it down and put it back on dripping wet. Can't tell you how great that felt.

The rest of the long ride went surprisingly well. I arrived in Perry at around 4 pm with 87 miles showing on my bike computer! 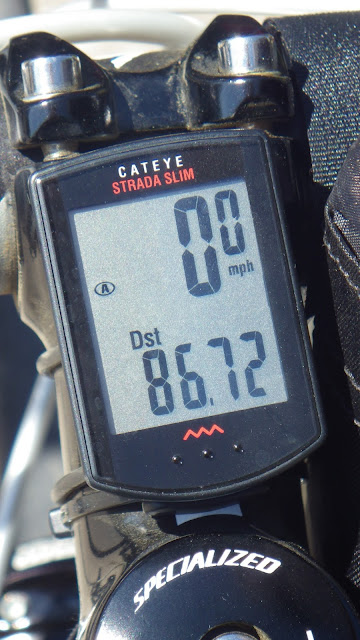 BIG storms were predicted for that evening and Shelly was watching out for us. She had arranged for Lu to babysit our bikes (which were safely tucked in our tent) and we headed to Shelly's son place just outside of Des Moines for the night.
Good thing, as a HUGE thunderstorm with high winds and hail hit Perry hard that evening.

The next day seemed like a piece of cake compared to Monday.

We perfected the morning routine that day - get up, pack up, grab some Gatorade and a banana, ride to the first of the 'good' coffee stands, have coffee (or latte or iced coffee. I also would do my morning stretches after having warmed up a bit - made a big difference and I was not the only rider doing so), ride to either another stand offering breakfast or the first town......Perfection! 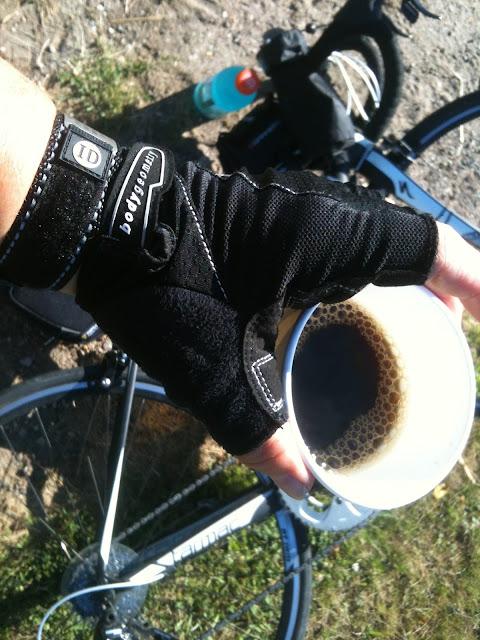 Helen and I split a 'fried pie' that morning. 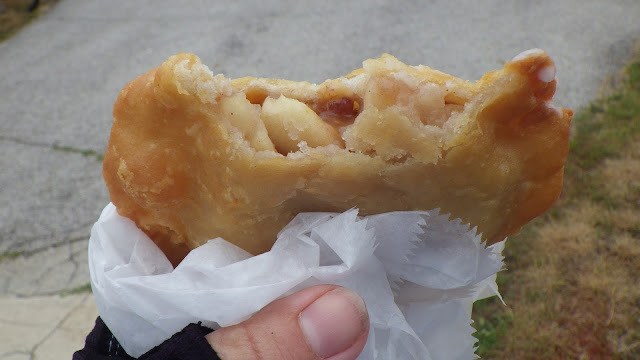 Apple, caramel, pecan....delicious does not begin to describe it!!! The lady selling the pies told me that they had made 1000 pies and had sold about 1/2 of them already. At $4 a piece that was a good day's income to be made at the end of one's driveway!!!

We also stopped for ice cream in the afternoon. The ice cream place was always situated 10 miles from the finish of each day's ride. A guy we had dinner with the first night told us that he NEVER passed the ice cream stand - that it rejuvenated him for the last 10 miles of each day. Helen and I didn't go that far, we only stopped the once - but it was churned right there on the side of the road and was truly delicious! 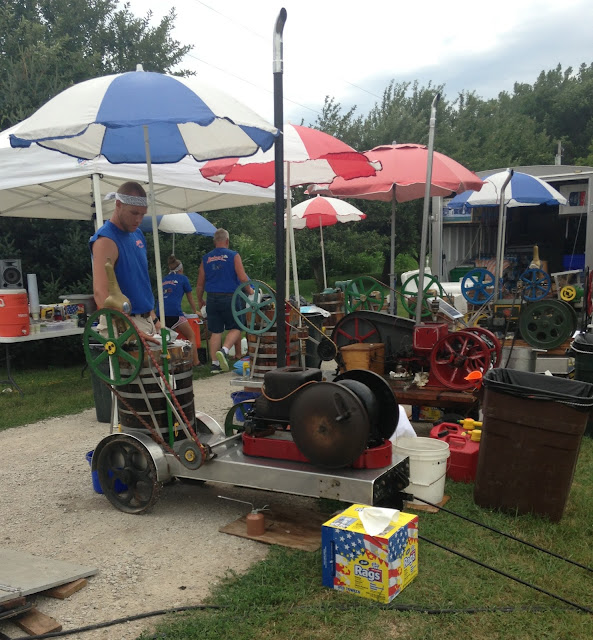 That night we were in Des Moines and things were pretty civilized. We stayed in BEAUTIFUL old house owned Shelly's friend, Sheryl.
We went out for dinner in Des Moines with some of Shelly's family and then I did a brief 'meet and greet' with some Iditarod fans in a local park.

The next morning Sheryl had a great breakfast waiting for us (nothing quite like waking up to the smell of cooking BACON!!) so we varied our routine a bit, but still hit the first coffee stand after riding through Des Moine! 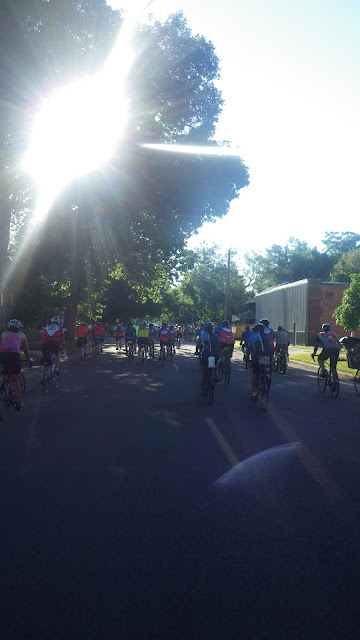 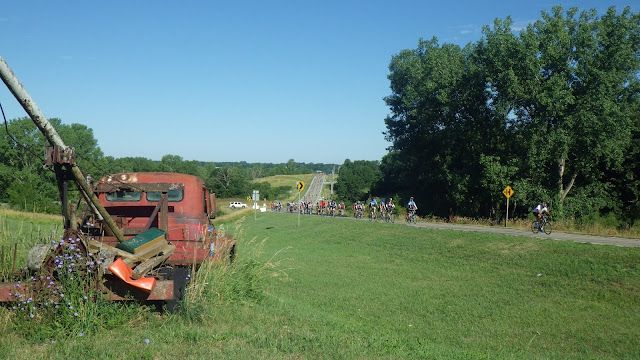 Again, this day went by fast and pretty easy.

We had arranged to meet up with Shelly in the 'meeting town' of Monroe and took a nice long break there eating, shopping and tapping our toes to music. 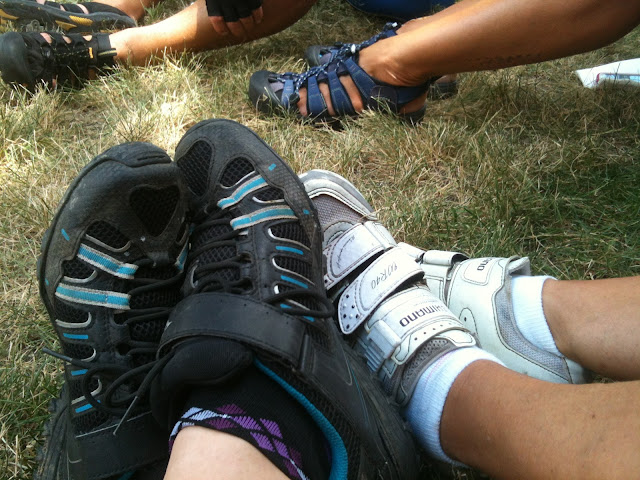 We actually stalled a bit in the last town to give Shelly time to get into Knoxville (SAG vehicles often had much longer drives than the riders as they had to stay off the routes we were on!)
We spent that night at the Curves Fitness for Woman center. When I walked through the door one of the women there looked at my biking gear and sweetly asked if I was there to work out. Ummm....NO!!! LOL

It was a great location as we were right in the middle of all the action!! Helen and I took advantage of the free wash and lube service being offered by WD-40 (they were promo'ing a new line of bike products they have out). 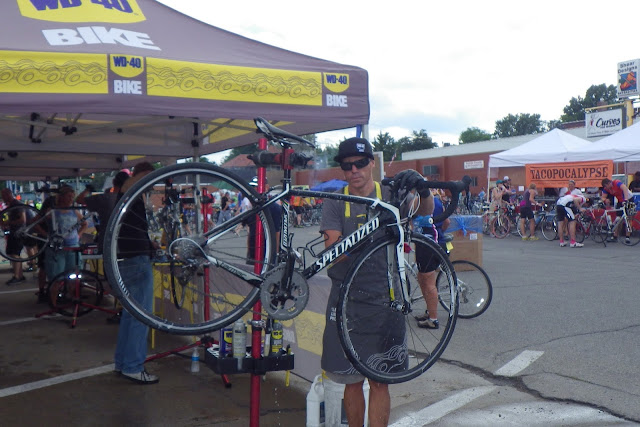 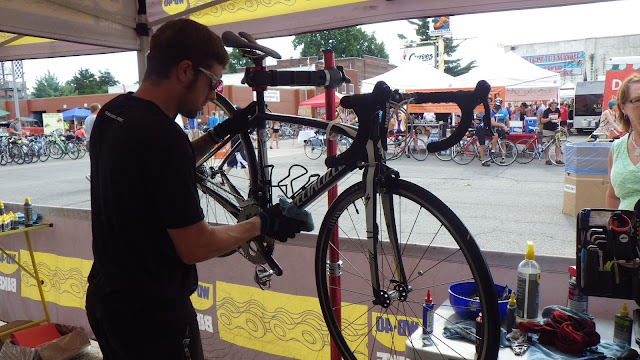 The guys were GREAT - checking brakes, and derailleurs as well. They even helped Helen out with her malfunctioning bike computer!!

The ride the next day from Knoxville to Oskaloosa proved to be the 'toughest' for both Helen and me. Nothing seriously went wrong, but both of us seemed to be dragging a bit more than normal. It was still a fun and pretty day though - and I believe that, true to my trend, my average mph still went up over the previous day. 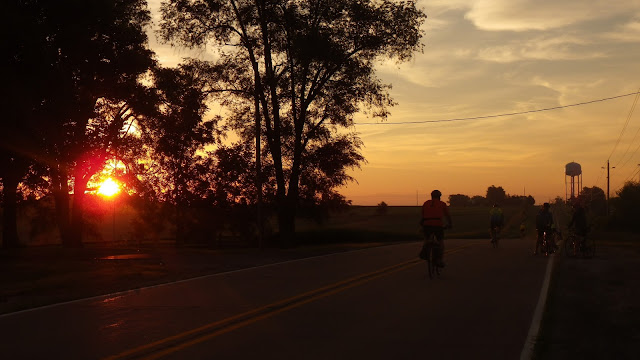 We took a nice break to refuel in Busey - even taking advantage of free Wi-fi in the AIR CONDITIONED local library!!! 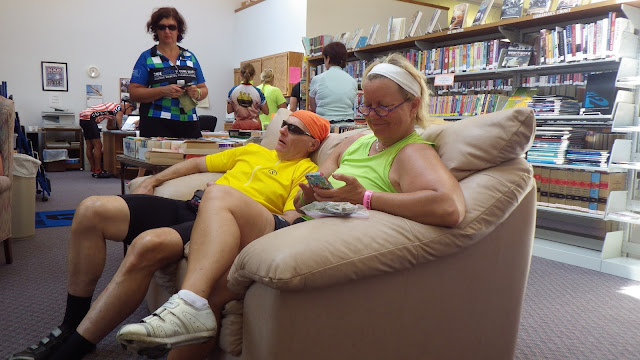 For the last bit into Oskaloosa we stopped for snacks that I would have NEVER imagined eating together - water, a dill pickle on a stick and watermelon.
Dill pickles, along with bananas, are a staple on Ragbrai. Apparently they do a great job of balancing electrolytes lost through sweat - and I will admit, it hit the spot VERY well.
And watermelon....well....who passes up fresh, local watermelon when it is hot???? 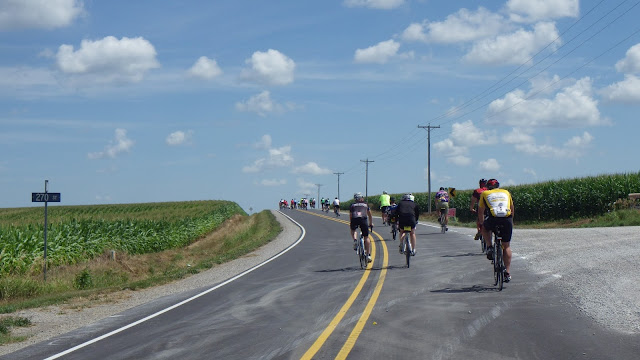 In Oskaloosa we knew we were staying at the campground at the local University so I stopped to ask for directions. Turns out it was unnecessary, as Shelly had done a GREAT job guiding us to our camping spot with our 'Winter Chick' signs. 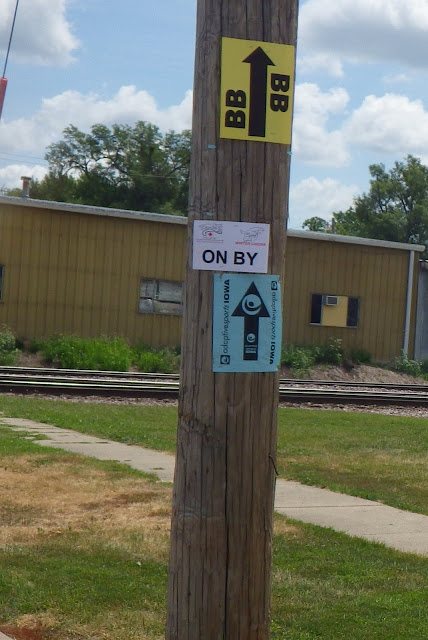 Our campsite in Oska was awesome!! 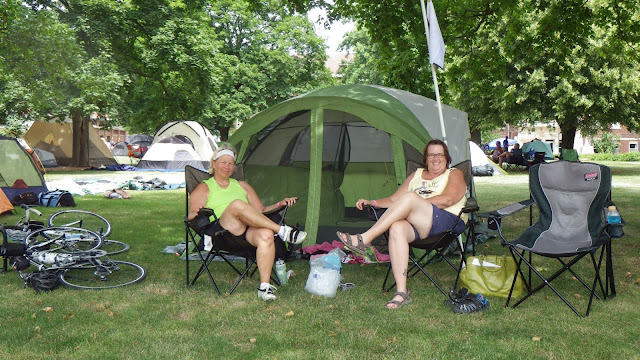 We grabbed a much needed shower in the University sports center...

...and then took the shuttle bus downtown for dinner...