My poor, dear landlady – she had a rough day yesterday – but I do want to say for the record that MOST of it wasn’t my fault...
Luckily, we all survived yesterday's run. Did I mention that Dasher and Hilda dragged me – on my side - through some trappers yard and around his circular driveway before they started to worry that I might follow through on one of the numerous threats I was making against their lives and brought the team to a stop – or that Jamie’s team scooted under a gate that was too low for her sled to follow?? It was an interesting day. Dogs, mushers, and gear are all fine though – so I consider it a very successful run. You know what they say about that which doesn’t kill you….. Thanks for being such a good sport Jamie!


Anyway, things in Alaska are going pretty well. I’m able to run 8 dog teams out of the yard here and bigger teams out of Bob Chlupach’s (and his lovely fiancé, Shae’s) dog yard, which is just a short trip up the Parks Highway. The only problem with running out of Bob’s yard is that the two of us inevitably end up talking Siberians and that stretches the day out – but the conversation is always enjoyable and educational, so I’m sure not complaining. Many of you may or may not know – but Moses, Herman, Hector, Hilda and Lingo all came to us from Bob. I greatly respect what he and kennel partner, Rick Outwin are doing with their breeding program.


Doug Grilliot is coming over this morning and we are going to load the dogs up and head over to do a river run today. Not too sure what conditions will be like, but I’m hoping to get a nice long run in on the critters.

Markus headed home last Friday. I haven’t got any frantic phone calls from his family, so I’m assuming that he made it home safely! I was very disappointed that we were unable to get him out on a sled during his visit, but I just haven’t quite figured out a way to make Mother Nature adhere to my schedule yet. He took it in good spirits.

Christmas was enjoyable. Sure, nothing is ever the same as being home for the holidays, but Jamie and Harry really do make me feel like family here. Doug and his family were also very gracious and made sure I was very well fed around Christmas.

I expect New Year’s Eve will be a quiet one. Usually at home with our satellite dish, Mark and I ring in New Year’s at 10 pm, by watching a New York channel. No dish here – and no way I’m staying up until midnight – so I’ll have to welcome 2006 when I get up in the morning. Ah, us mushers are real party types – as long as the party doesn’t go till past 10!

Anyway, that is the report today from Alaska!

Wishing you all the very best for the coming year!!

“May you always have walls for the winds, a roof for the rain, tea beside the fire, laughter to cheer you, those you love near you and all your heart might desire” (Irish blessing)

Well, I’d send out an announcement that we have arrived in Alaska – however, I’m sure the ruckus that Batdog is making out in the dog yard is loud enough for everyone to hear. Seems he is very fascinated with the fact that there are dog yards all over the neighborhood to trash talk and gossip with. With time out only to gulp down his dinner, he has been striking up conversations with every dog within a 5-mile radius – which is hundreds!

If he doesn’t shut up soon, he is going to get us run out of the state or at least the neighborhood!
Anyway, our trip up to Alaska went very well. The new dog truck is a DREAM to drive and live out of – even when stuffed to the max with gear and supplies. With those two tanks on it, we had a much bigger safety margin on when we had to fill up and were able to eliminate a lot of stops along the way. BTW – the truck was full when we left home. It cost me $649.67 Cdn and $100 US to get us to Willow. The highest price we paid was $1.185 per liter in Watson Lake – although I’m not sure what the $2.749 per gallon US price from Tok works out to in liters/Cdn $.


Markus was a very enjoyable traveling companion. I was especially pleased to find out that we are both country music fans, so battles over the radio station were not an issue (I guess I always just assumed that the LOUD pounding sound that we could hear long before his truck pulled into our yard wasn’t country music!) 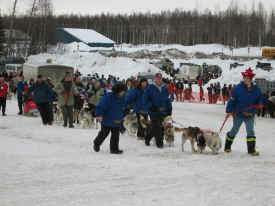 Moving towards the Iditarod 2005 Restart...
Grover and Gus in lead with handler Markus (red hat).
(Photos by Gwen Ross)
Markus will also be able to exercise his right to vote for the first time when Canadians head to the polls this January. As a person that gets very upset over voter apathy, I was pleased beyond belief that Markus not only intends to hit the polls, but also wants to be an informed voter. So, as we drove over from Tok to Sheep Mountain we were very happy to be able to listen to the leader’s debate on the satellite radio.

The border crossing went wonderfully. I think if border guards could give out ‘gold stars’ we would have got one. When they asked what I had in truck (in regards to dog food), I pulled out a lovely list that Mark had made up listing what we had, how many lbs of it, and where it was from. The border guard smiled as soon as he saw that and muttered about that being how it should be done. He made a quick trip to the back to double-check the most recent rules and regs and came back out with another agent in tow. Both commented that this was the way to do things and that we should continue to do up our ‘Bills of Lading’. They smiled, handed me back the sheet and wished us a nice trip. In talking to other Canadian mushers at the Sheep Mountain race, we were pretty much the only mushers that scooted through the border without problems.

For the record – what was on the truck (dog food wise) was:
I must say that it sure doesn’t feel like I have been away from Alaska for nine months. This place feels almost as much like home as Perryvale does now.

Jamie and Harry have a wonderful new kennel sign on the edge of their property. It was very touching to walk in the house and find a lovely wood NorthWapiti Kennels sign (with our dog team/maple leaf logo) almost ready to hang up there next to their Westrunner Kennels sign. What a special gift. I am so very lucky to have friends such as them.

The veteran dogs definitely remembered the dog yard and a few ran straight back to their houses from last year when turned loose. The rookies are definitely mind boggled. Jinx’s eyes have been the size of frying pans for a couple days now due to all the new and exciting things she is seeing.

Oh gosh, that is right – I guess I haven’t even mentioned who all is up at NorthWapiti North with us. Sorry about that – things got rather hectic when we decided to try to scramble up to Alaska in time to hit the Sheep Mountain Race, so I didn’t get a diary entry out before we left.

The dogs here this year are:

I got GREAT news last night. There has been some stuff going on with Mark’s job and it was looking like he wasn’t going to be able to get time off until February this year. That would have been a big disappointment for both of us. However, last night he found out that he is okay to come up January 2nd, as originally planned. Wahoo!! That just took care of my Christmas list – well almost took care of my list. If the temps here in Alaska would drop, it would start snowing, and I found out Mark was coming up January 2nd then my list would be completely filled!

I’ve got a diary entry on the Sheep Mountain Race well in the works – so watch for that later today!
Karen
Posted by Shmoo at 15:09 No comments: