I hadn't said anything, but I had a bit of a scare with Crunchie this week. 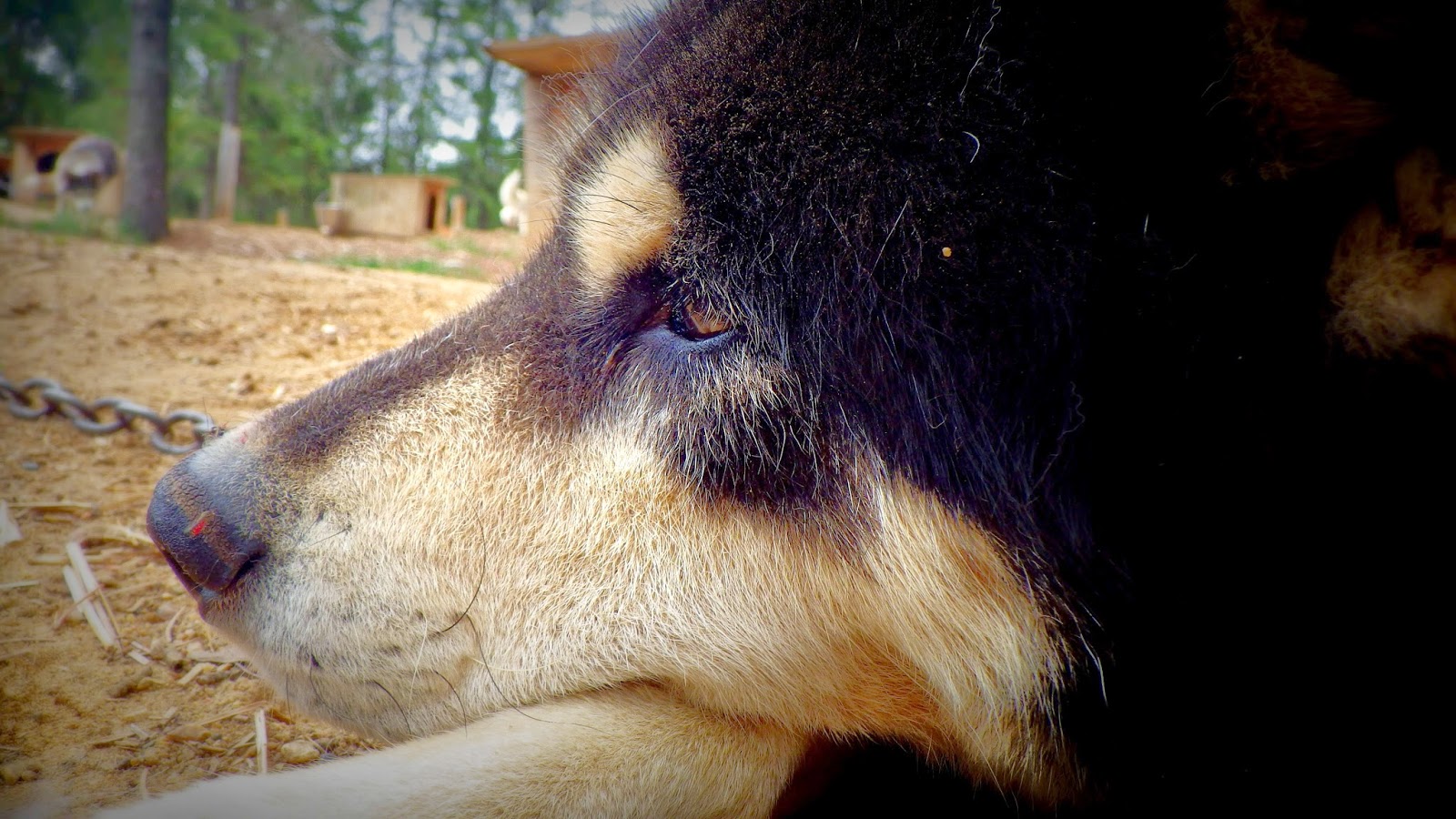 Thankfully a run to the vet proved it not to be the scary thing I thought it was and just a neck injury. Apparently after 11 years of racing/training without an injury or illness, the Old Man wanted to know I cared enough to spend money on him at the vet (as if there was ANY doubt).

The result of it though is that Crunchie has moved to a new place in the kennel.

Let me fill in some background.

None of our spots in the dog yard are 'fixed'. Dogs move to new spots in the yard over the year and their lives. I like them to have new neighours and get to know other teammates well. I think it helps them work harmoniously in harness. That is except for one spot in the kennel, the stakeout closest to the house.

For many years that was the domain of Grover, the best sled dog I've ever run. It's a good spot. You get prime viewing on BAIT TV, can keep an eye on the happenings in the house, are first to be fed, etc., etc. He loved his spot.

After he passed I thought I'd leave it empty for a bit, but that seemed to only make the 'hole' in the dog yard even more noticeable, so Grover's first born son, Crunchie - a young male that had already stolen my heart - moved in. For about 7 years that has been Crunchie's spot.

But with a neck injury, he needed to be off a chain anyway, so it seemed like a good time to admit that he was starting to age (he's 13 next month) and move him up to Geriatric Park.

He's now rooming with fellow 13 year old 'bachelors', Hector and Herman. Introductions were effortless, although Crunchie was not pleased when I walked out of G Park without him and he sat in the corner of the pen closest to the house staring at it with his beady, dark eyes for several hours last night. I could feel them boring into me through the walls. I poured myself a Jack Daniels and turned the TV on.

We don't have many hard and fast 'rules' in the kennel in terms of hierarchy or such, except that Crunchie is always the first fed. So the Seniors were OVER THE MOON delighted to discover that G Park moved to the head of the feeding line as of this morning. 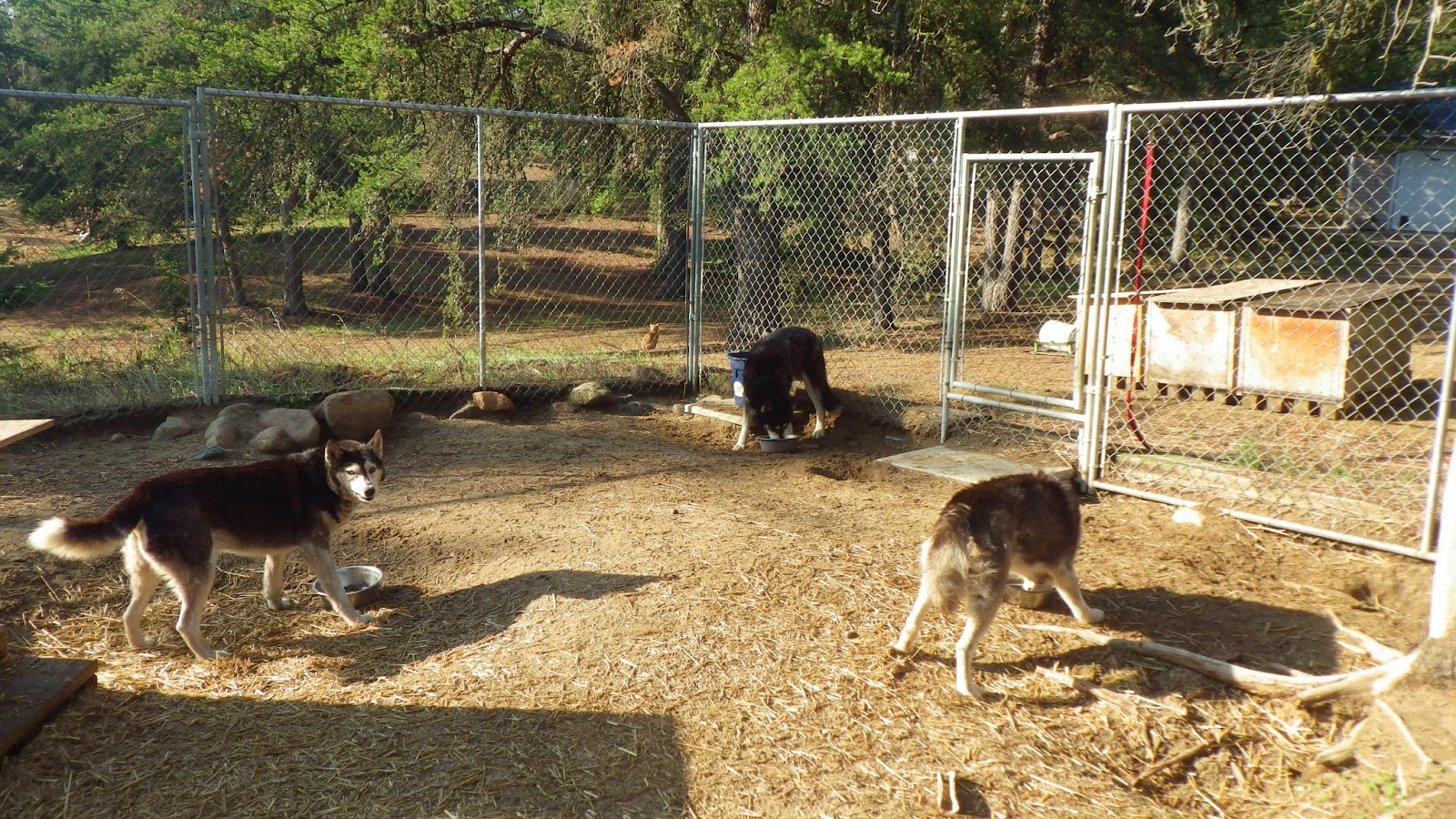 But that left a hole in the main yard... 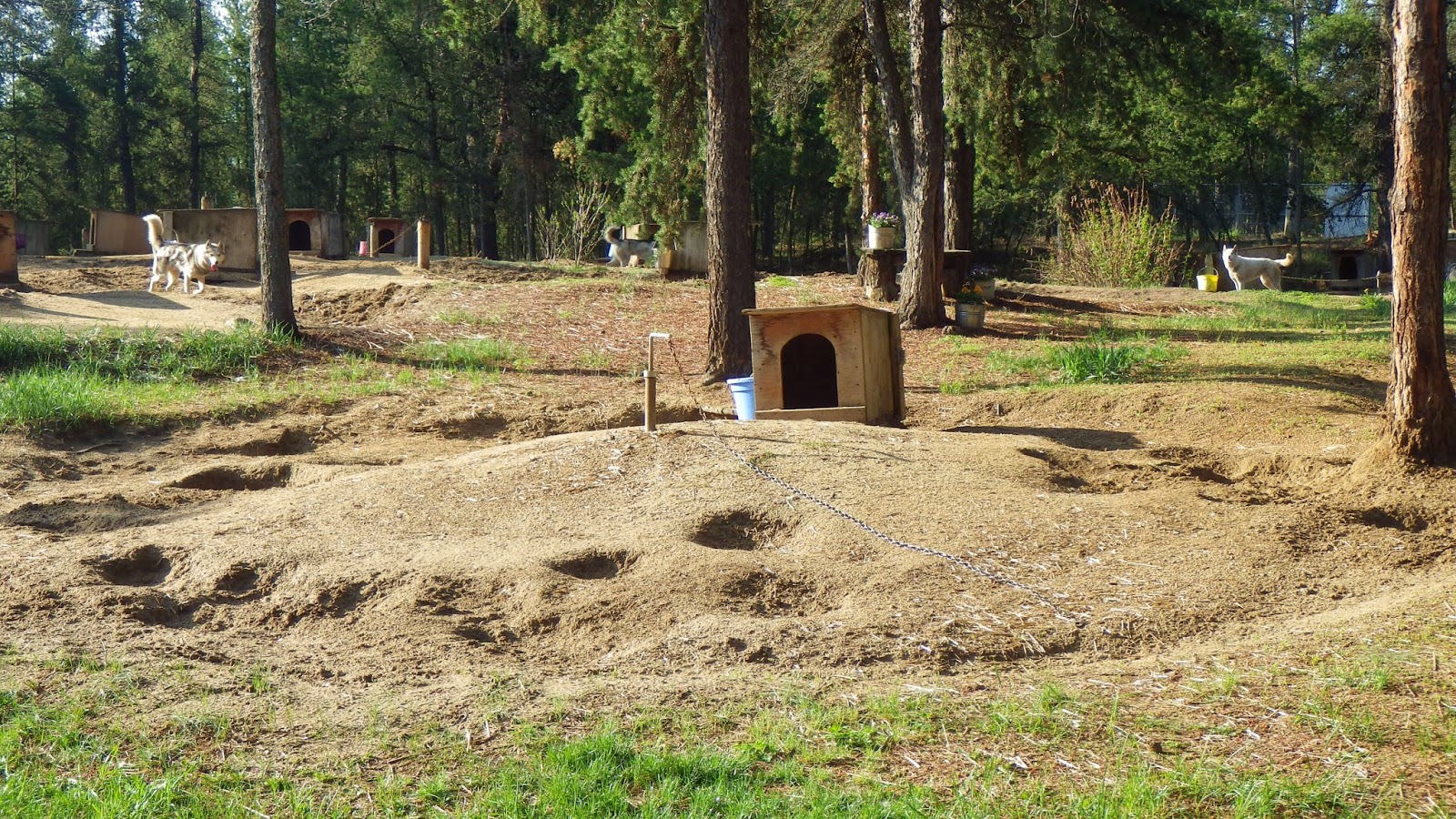 ...many holes, actually, but I was speaking more figuratively!

Anyway, there was much discussion last night throughout the yard as to who that spot belonged to. Grover children, like Wolvie, argued about being next in line to the 'throne', Turtle argued he was Crunchie's first born son, Smartie recruited her Auntie Colleen to plead her case as first born daughter, Tess insisted as 'main leader' she was entitled....it went on and on and on.

In the end, I chose to go with 'tradition' and gave the spot to Crunchie's first born son - Turtle. 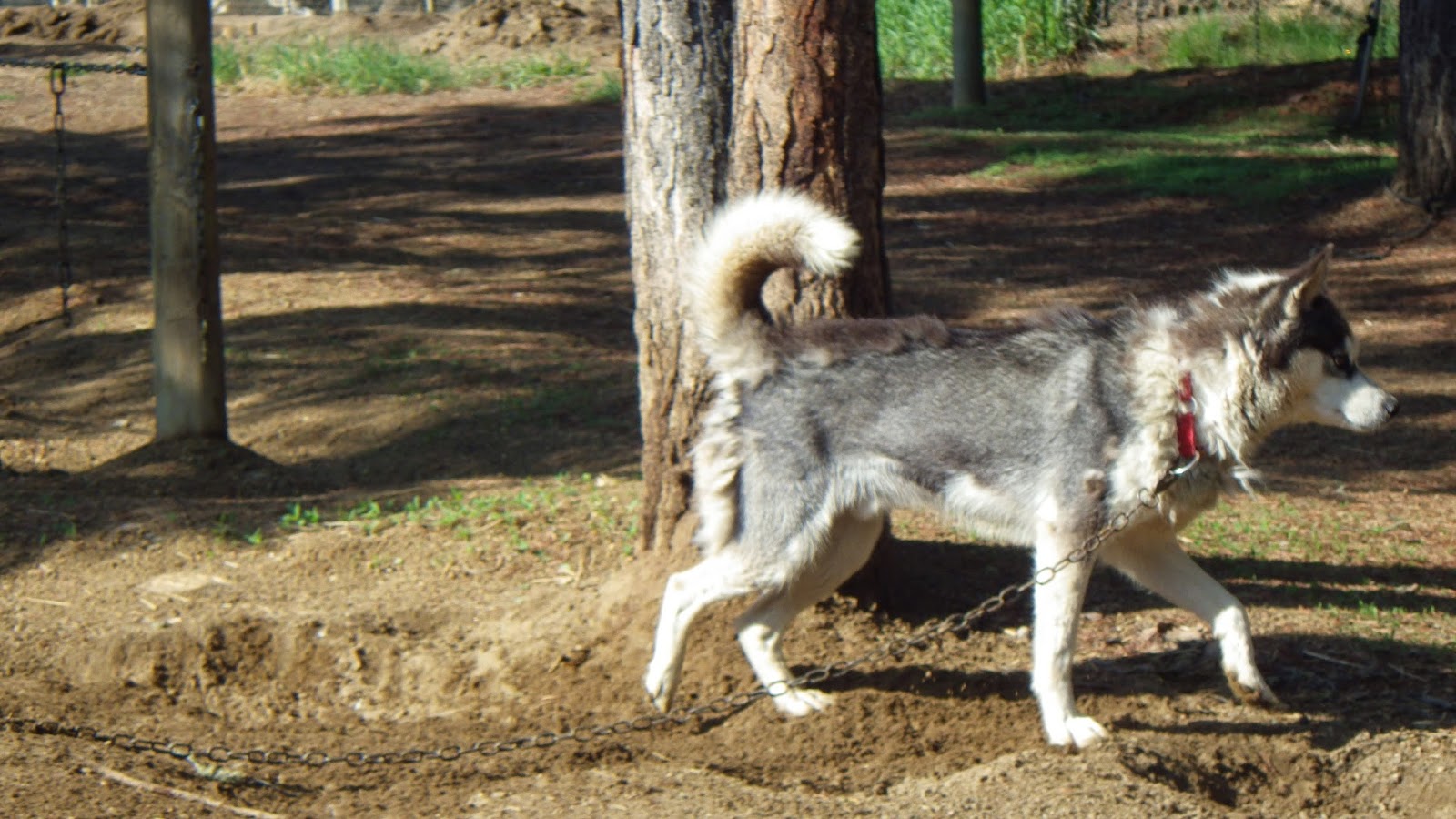 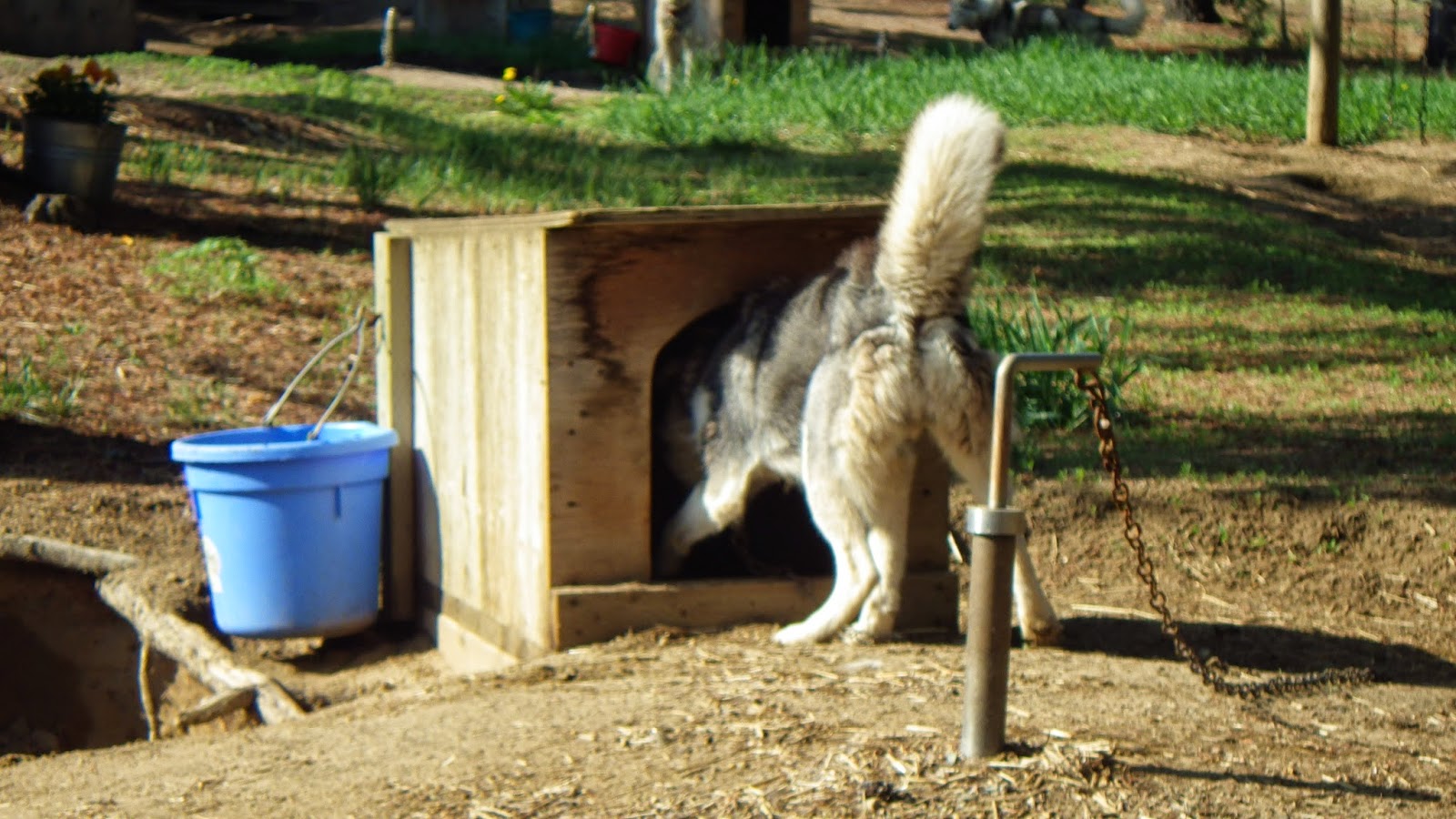 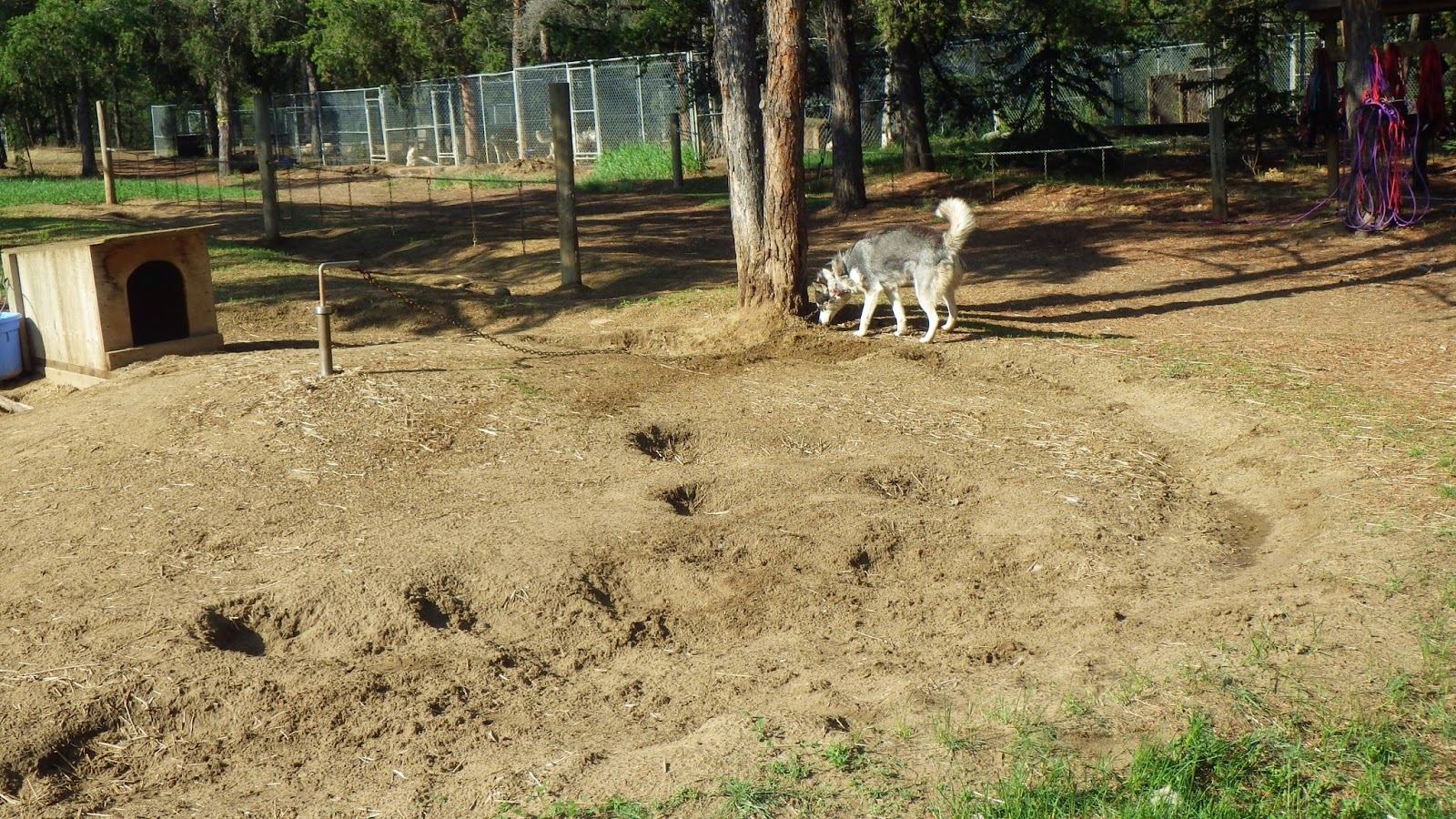 Turtle has been strutting around most of the morning humming songs from the Lion King soundtrack and checking out his new digs. 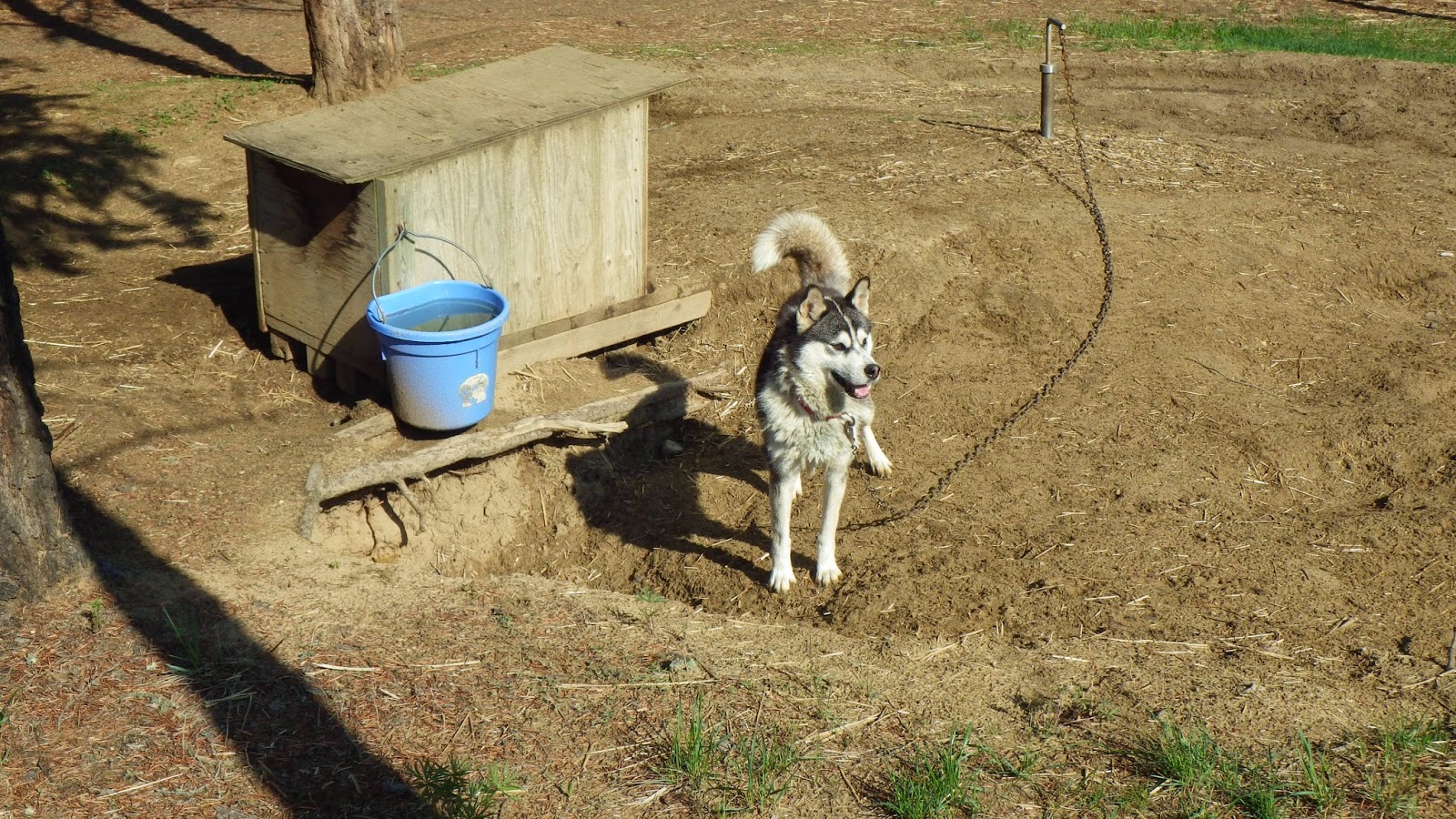 Turtle's spot was claimed by another Crunchie son, Chewy. He's loving all his new neighbours!!! 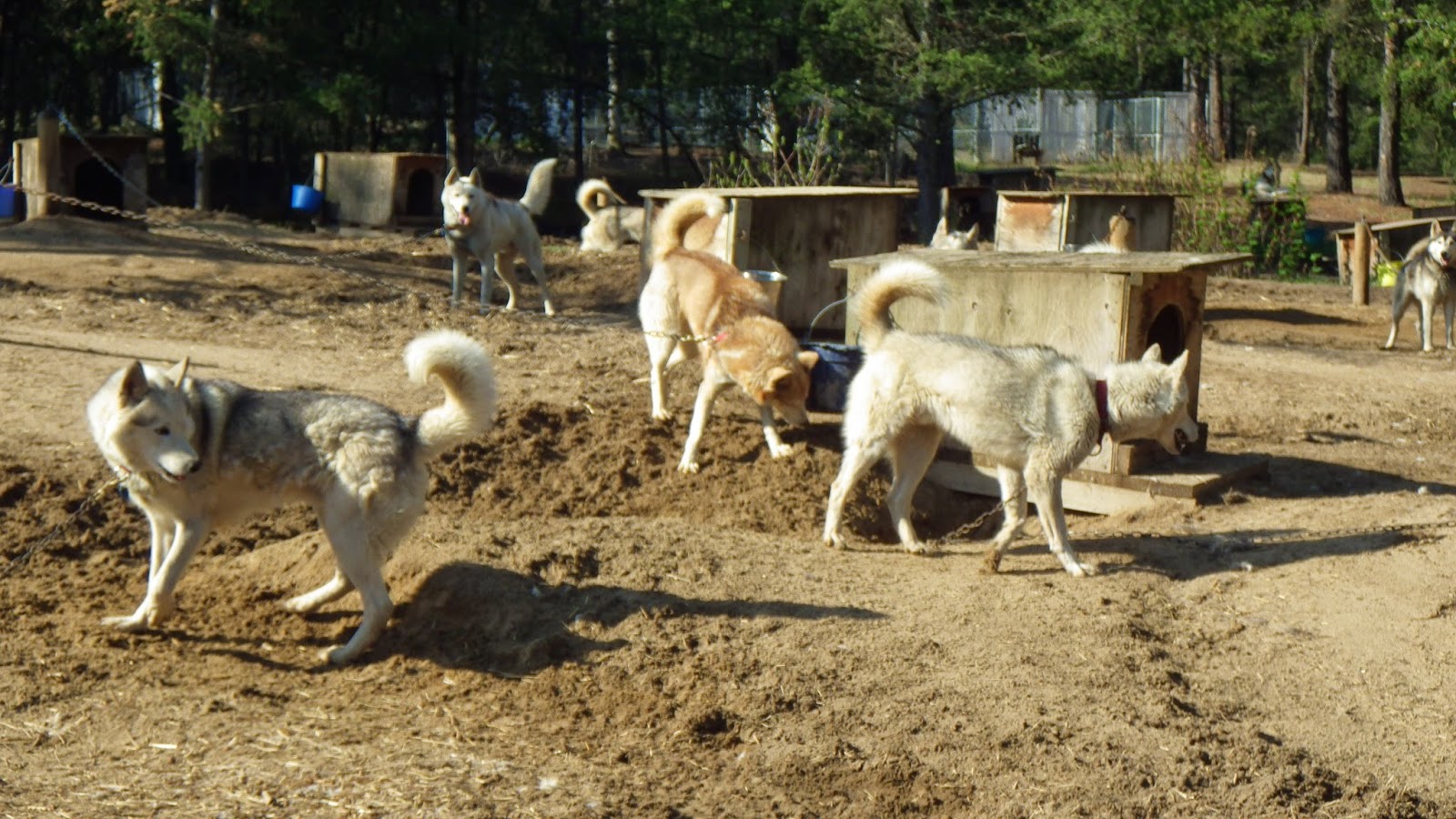 The yard will likely be buzzing all day as everyone gets acquainted with each other and explains the 'rules' peculiar to each 'neighbourhood' of the dog yard.

Crunchie? Well he is stoned on pain meds and napping away in G Park without a care in the world.
Posted by Karen Ramstead at 10:33 4 comments: 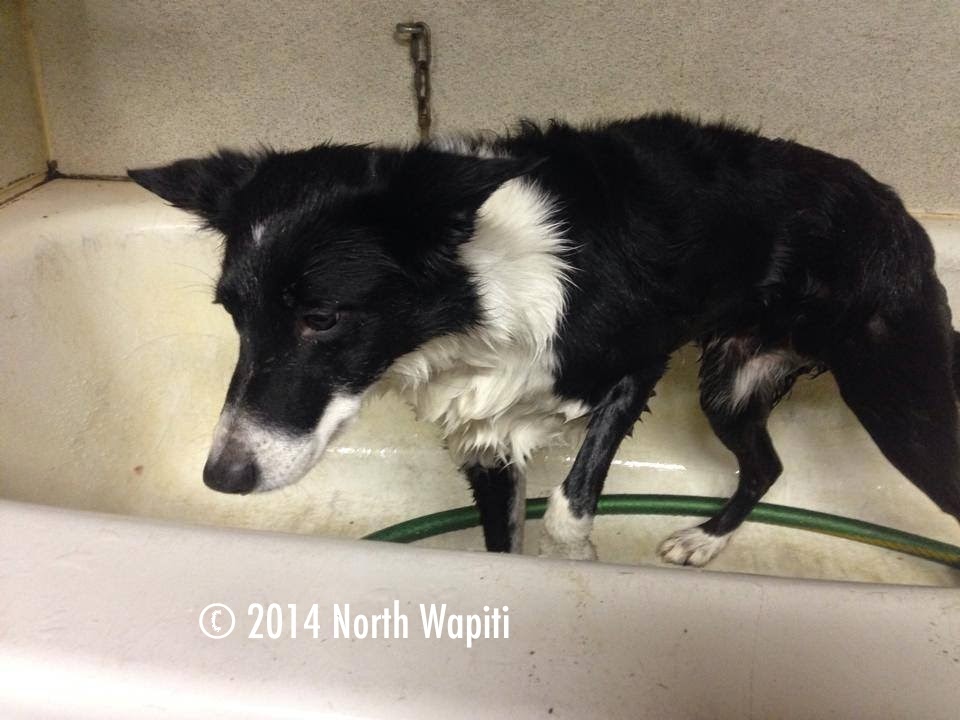 It just seems like yesterday that we had this

Little squeeky sausages in the pool, all cute and adorable with their pink feets and eyes closed.  So adorable, so cuddly. 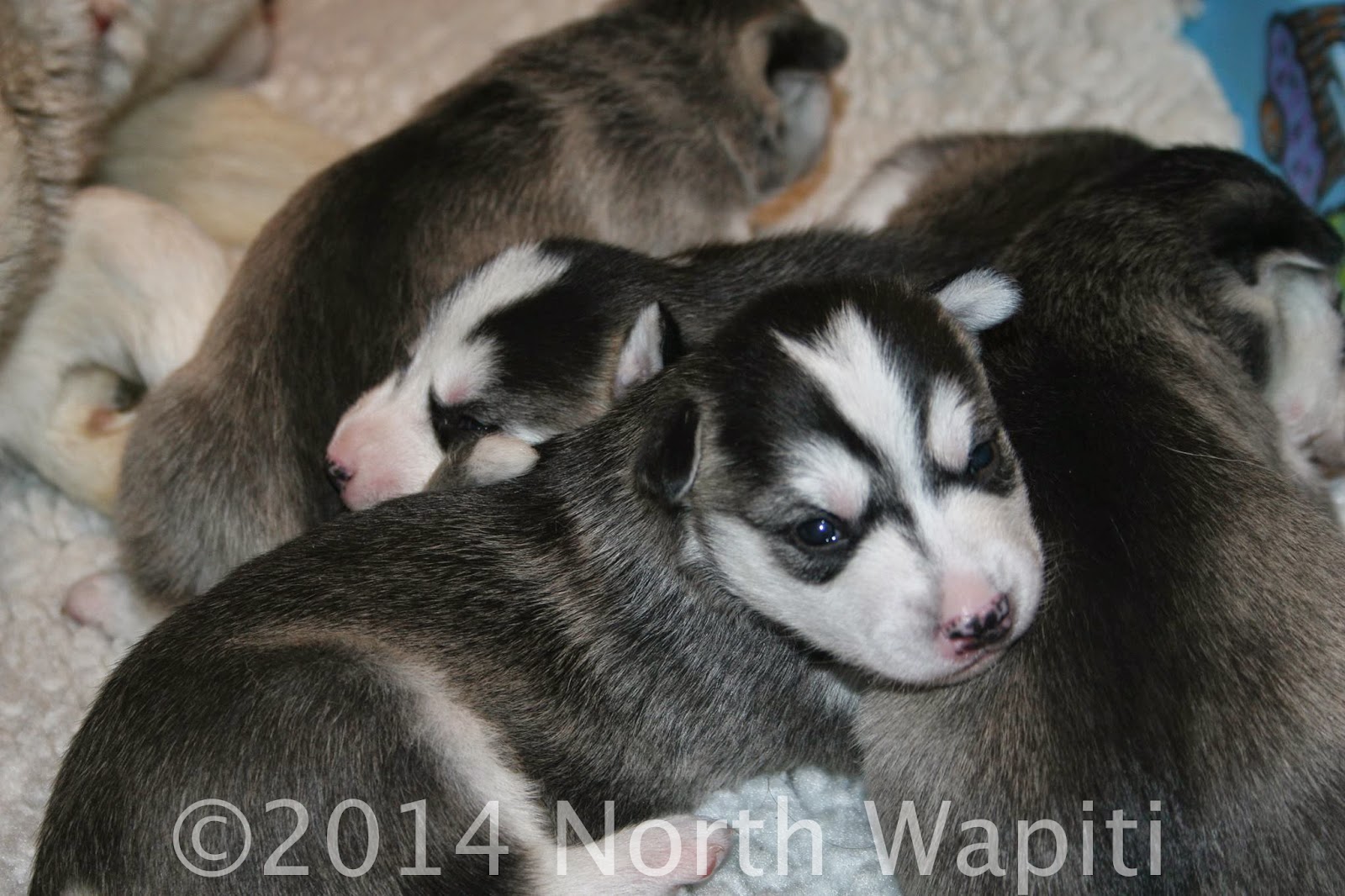 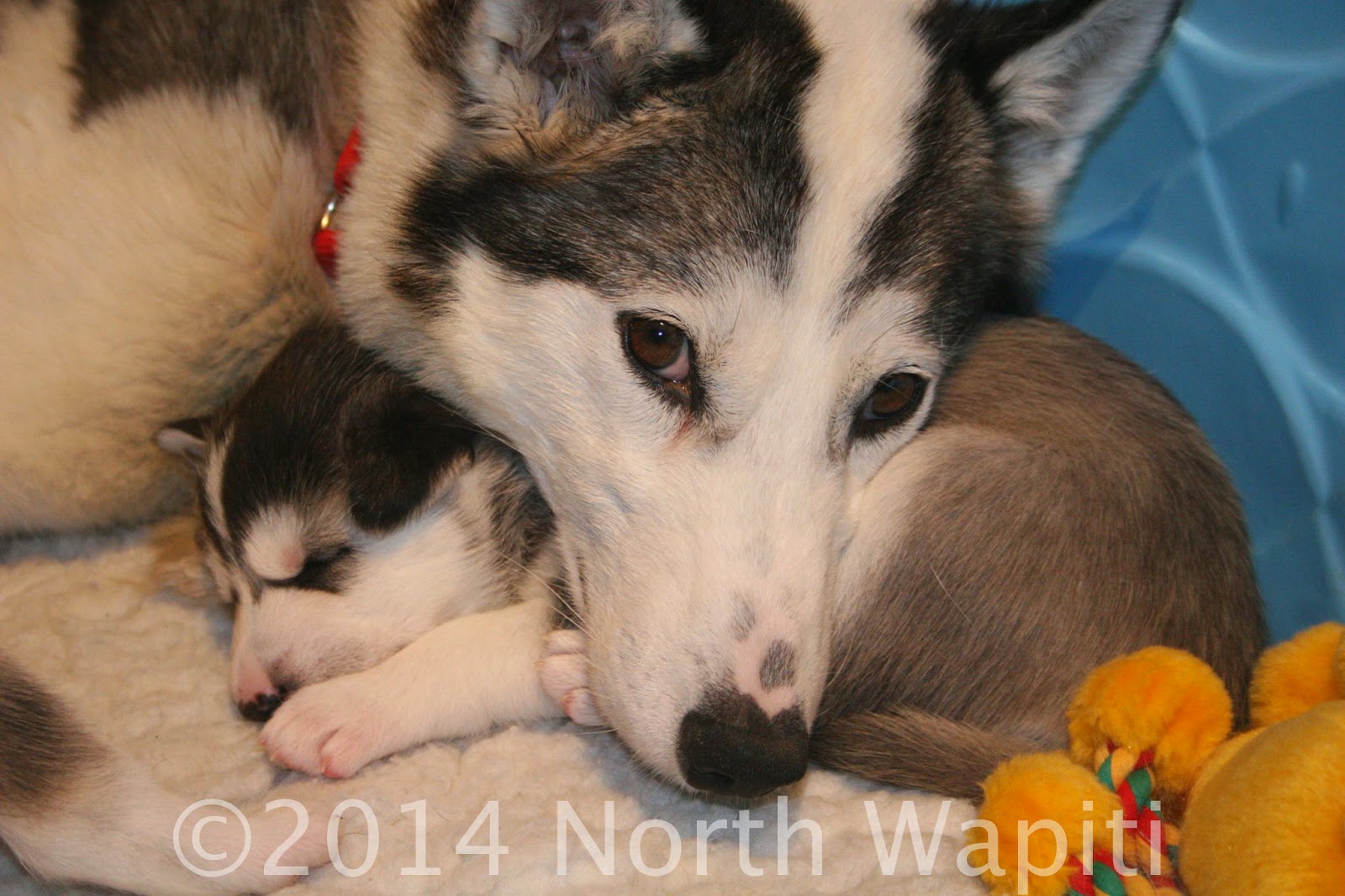 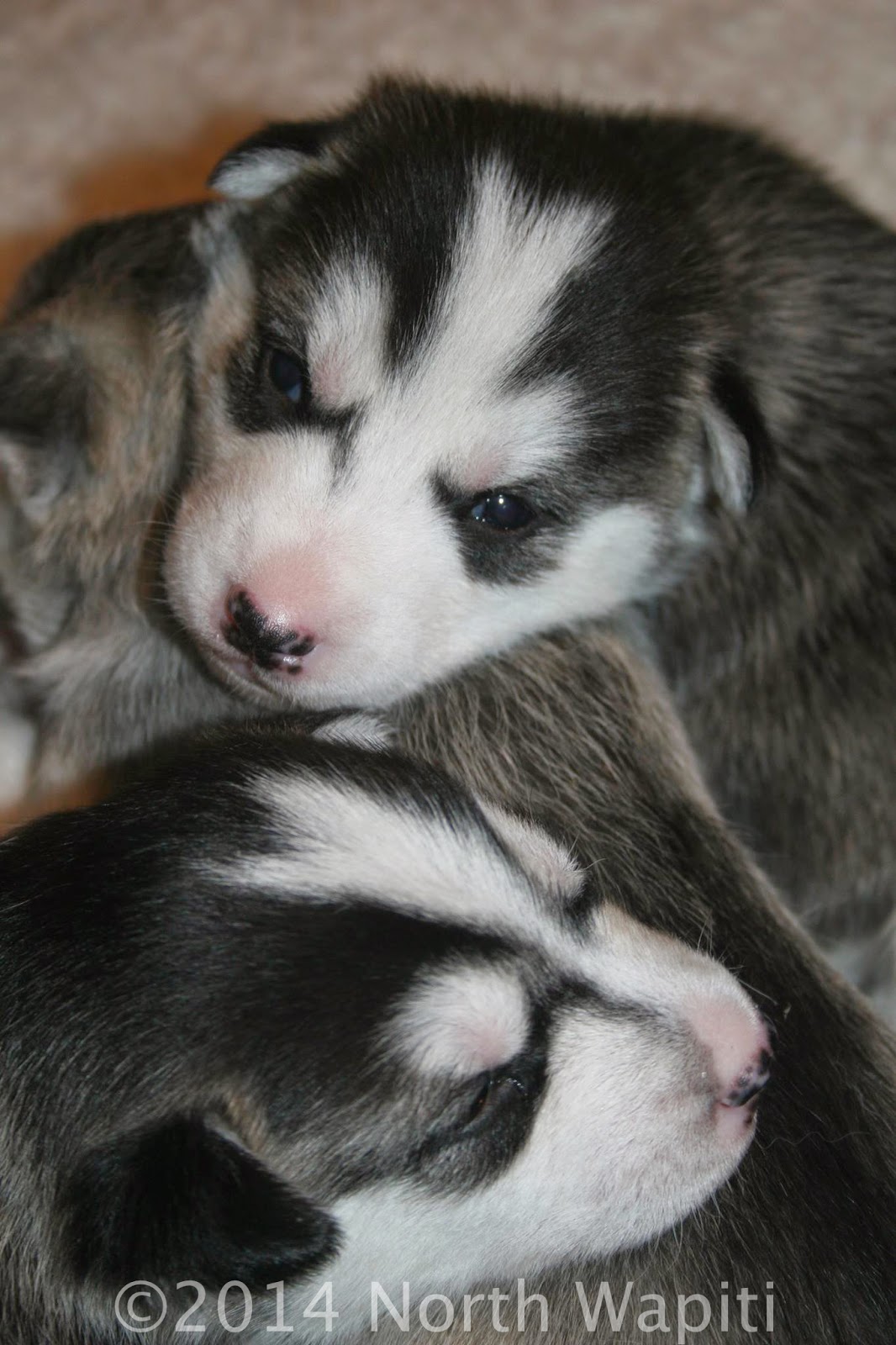 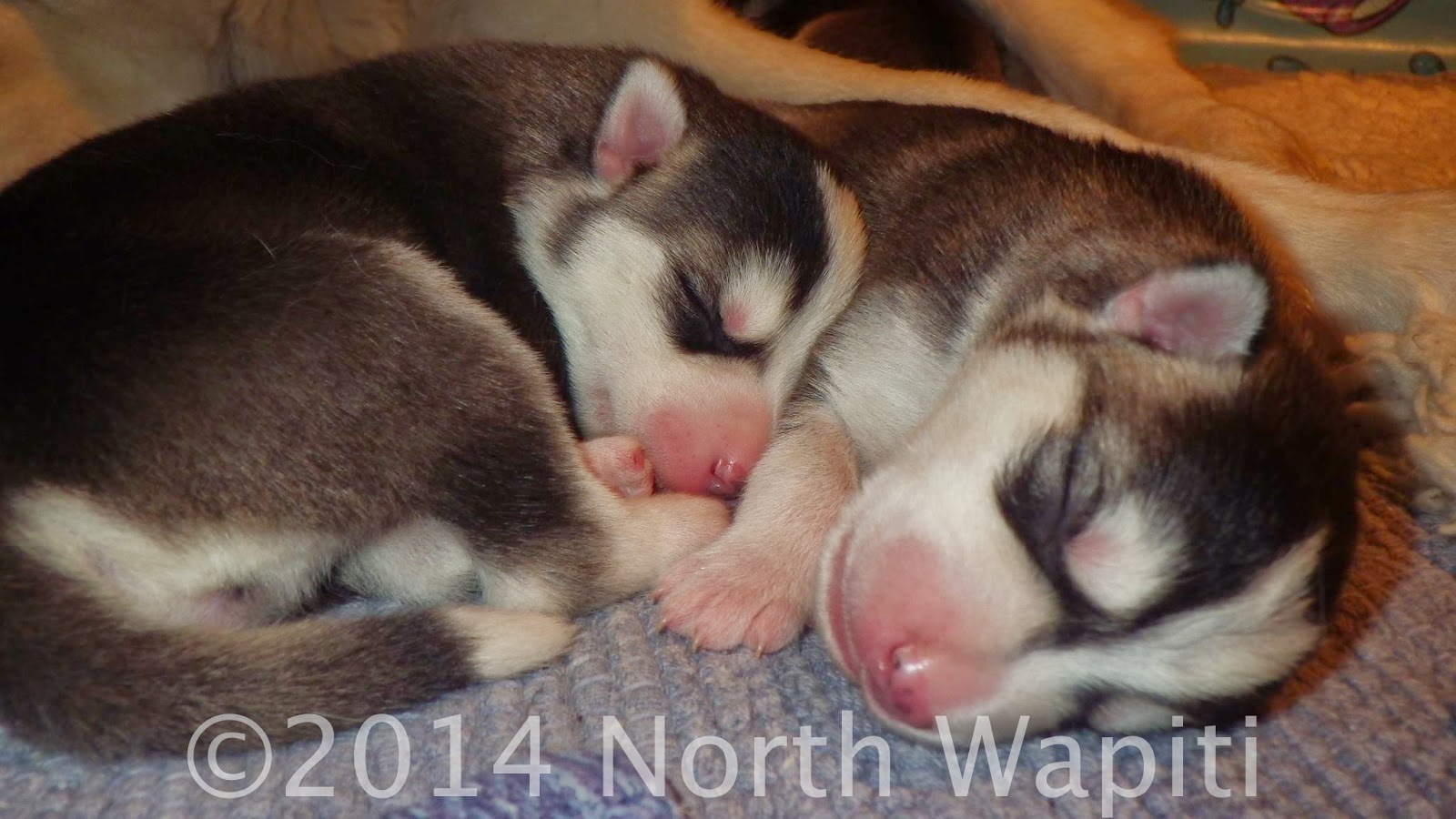 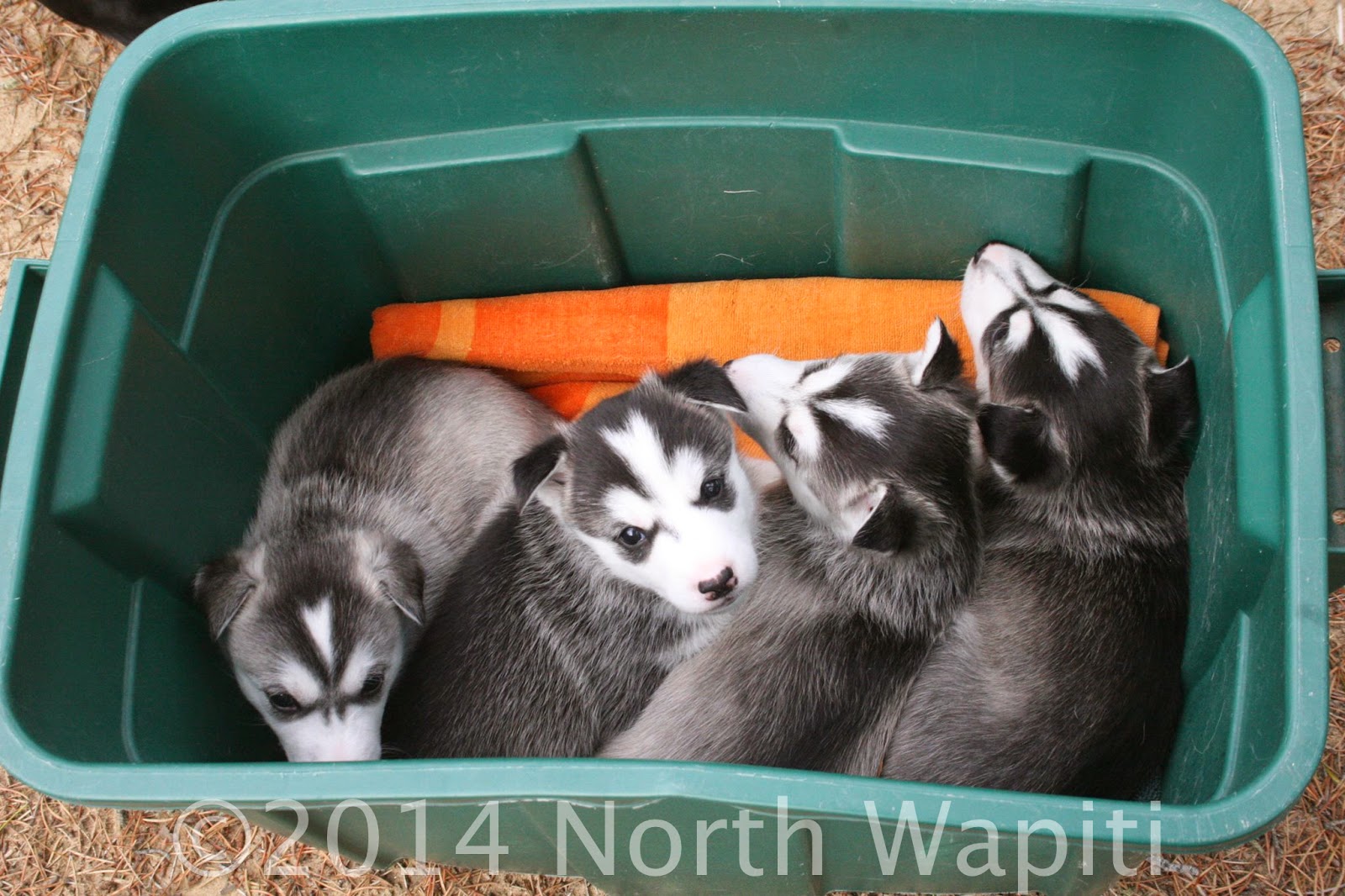 and unmercifully thrown outside into the wilds of the puppy kennel!!!  Oh the Pupmanity!! 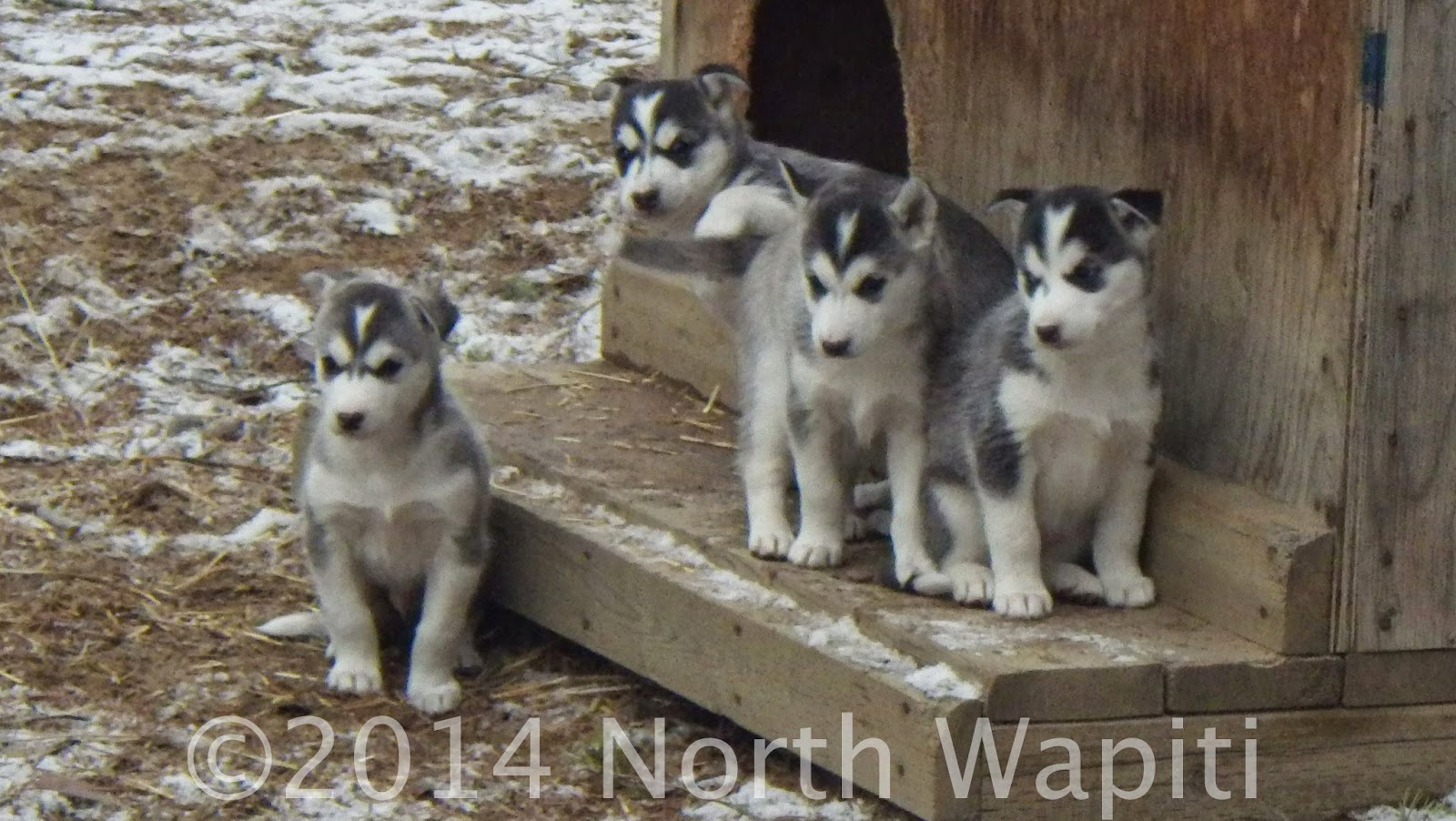 Where they really like it because there's new and exciting things to chew on and attack and pounce on, and play, and get muddy, and ...  well, there's only one safe place when that happens...

So, yeah, we've been a bit busy here at North Wapiti lately... but we promise, we'll get back to the business of blogging all about it starting now, so sit back and enjoy the trip that's about to come (you may want to pack some dramamine... and perhaps some snacks.).